How This Governor Upheld Religious Freedom in Issuing Marriage Licenses 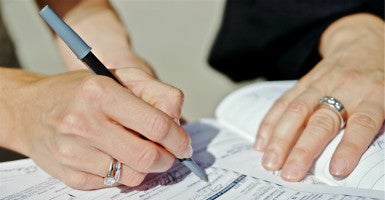 Acting to resolve a conflict between personal conscience and political duty on the subject of same-sex marriage, Kentucky’s new governor decided that marriage licenses don’t have to bear the name of the county clerk whose office issues the license.

Gov. Matt Bevin, a Republican, announced his executive order last week along with four others.

“To ensure that the sincerely held religious beliefs of all Kentuckians are honored, Executive Order 2015-048 directs the Kentucky Department for Libraries and Archives to issue a revised marriage license form to the offices of all Kentucky county clerks,” a statement from the governor’s office reads. “The name of the county clerk is no longer required to appear on the form.”

During his campaign for governor, Bevin came out in support of Kim Davis, the Democratic clerk of Rowan County,  who drew national attention when she went to jail for five days for refusing to issue any marriage licenses to avoid issuing them to same-sex couples. Davis cited her religious belief that marriage is the union of a man and a woman.

“As we move into the New Year and upcoming session,” Bevin said in a statement, “I look forward to working with legislators and stakeholders to build consensus and drive policy that makes a meaningful impact on the lives of all Kentuckians.”

Bevin and Lt. Gov. Jenean Hampton were sworn into office earlier this month. He succeeds Steve Beshear, a Democrat, as governor.

Whether or not she personally issued a marriage license, Davis had said, her name on the document signaled her consent.

“The controversy over Kim Davis and marriage licenses was a creation of a governor who was unwilling to do anything to help accommodate people with reasonable religious beliefs,” Roger Severino, director of the DeVos Center for Religion and Civil Society at The Heritage Foundation, told The Daily Signal.

Anticipating the Supreme Court decision that would redefine marriage, Davis petitioned the Kentucky Legislature in January to accommodate the religious beliefs of clerks, Severino said. The legislature did not act.

Republican lawmakers in the state had requested that Beshear issue an executive order to accommodate Davis and other objecting clerks, USA Today reported.

“Regardless of whatever their personal feelings might be, the overwhelming majority of county clerks are following the law and carrying out their duty to issue marriage licenses regardless of gender, and the courts will deal appropriately with the two or three clerks who are acting otherwise,” Beshear said in July.

“Kim Davis didn’t want to attach her name and title to forms recognizing a marriage she does not believe exists,” Severino said. “So she asked for accommodation. She was ignored.”

With Bevin’s new executive order, Severino said, “nobody is denied anything.” Clerks who are willing to issue marriage licenses to same-sex couples may do so, he said: