Why Liberals Are Wrong About Land Mines 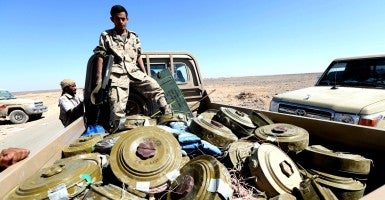 One of the progressive left’s favorite causes is campaigning against land mines.

The Obama administration naturally has promised to stop producing or buying anti-personnel land mines (APL). In addition, the administration has said it will to stop using mines outside the Korean Peninsula, and – eventually – accede to the Ottawa Convention, which bans anti-personnel mines entirely.

Although this might sound great to some, land mines actually cause few civilian casualties, and are an important weapon for the U.S. military.

In 2014, according to the Landmine Monitor – published by the campaigners themselves – land mines caused only 618 casualties worldwide. By way of comparison, about 3,500 people die of drowning every year in the U.S. alone.

On the other hand, improvised explosive devices (IED), the favorite weapon of terrorists, caused 1,069 casualties. IEDs often meet the legal definition of a land mine, though unlike standard-issue land mines, they’re not made in a factory. But they’re the biggest killer of all.

The press couldn’t even report these figures accurately: Reuters, for example, ran the numbers together, and claimed that 3,678 people were killed or injured by land mines in 2014.

Actually, factory-made mines were responsible for less than 20 percent of those casualties. IEDs and the leftovers are far more dangerous – partly because, in poorer parts of the world, farmers often use leftovers to clear stumps, making casualties inevitable. Both the campaigners and the press like to add the casualty figures together because it makes mines seem more dangerous.

U.S. land mines are not responsible for any of these casualties, and no one claims that they are. U.S. land mines self-deactivate reliably so as not to cause unintended civilian casualties. Repeated studies have found that no other weapon can protect U.S. forces and civilians as reliably as land mines.

The administration went ahead with its near-ban on U.S. land mines in spite of the fact that it is still “conducting a high fidelity modeling and simulation effort to ascertain how to mitigate the risks associated with the loss of APL.”

In other words, the administration has banned most U.S. land mines, admits this is risky, and admits that the best it can hope to do is “mitigate” these risks.

The left likes to argue that the Ottawa Convention has reduced land mine casualties since it came into force in 1999. But many of the casualties from land mines in the early 2000s were caused by wars in the Balkans and Africa, wars that have since ended. These wars often involved former Soviet clients, or Soviet successor states, and the Soviet Union was a major land mine user and exporter.

The decline in casualties – if it is being accurately measured – may mostly be the result of the fact that wars are now being fought between different states, and in different ways. Undoubtedly, the clearance of old mine fields – for which the U.S. provides by far the most financial support – has reduced casualties. But a ban on U.S. land mines won’t help, for the simple reason that U.S. mines aren’t killing anyone.

Nor would a U.S. ban offer any kind of moral lesson to others. IED use has skyrocketed at the same time as the world is supposedly moving away from land mines: amazingly, it turns out that terrorists aren’t interested in learning lessons in the humanitarian conduct of wars from the U.S., or from anyone else. Even if all nations stopped using land mines completely, IEDs that mimic land mines wouldn’t go away.

The worst irony of all is that land mines can be used to protect civilians as well as our troops from terrorists. We are denying ourselves a weapon that we use properly, while at the same time the terrorists are using homemade versions of the same weapon to kill our troops and civilians alike.

The administration has, of course, said nothing about seeking the advice and consent of the Senate as it has moved U.S. towards compliance with the Ottawa Convention. With the Iran nuclear deal and the Paris Protocol, its policy on land mines is yet another end run around Congress.

But Congress has taken notice: thanks to Rep. Randy Forbes, R-Va., with the support of Rep. Mike Kelly, R-Pa., the 2016 Fiscal Year National Defense Authorization Act prohibited the Pentagon from destroying U.S. land mine stockpiles and required it to submit a report on U.S. land mine policy.

Land mines are a weapon, and like any other weapon, they can be used responsibly or irresponsibly. The U.S., which uses this weapon responsibly, should not give up on land mines and join the Ottawa Convention simply in order to win applause from the progressive left.

The world is too dangerous for this. The U.S. has the defense and safety of its troops to consider.