Why Is Obama Administration Siding With Iran Over Congress? 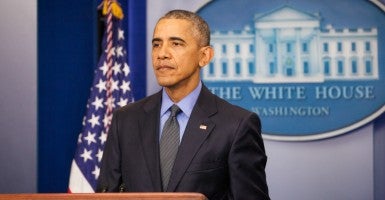 The Obama administration’s controversial nuclear deal with Iran has generated a diplomatic kerfuffle that could limit Congress’s latitude in addressing unrelated security issues.

Senior administration officials have advised congress that a law passed on Friday, which tightens rules of the Visa Waiver program to make it more difficult for potential terrorists to gain entry into the U.S., could violate the Iran nuclear agreement.

Under the revised law, foreign travelers who hold citizenship or have traveled to Iraq, Syria, Iran, or Sudan in the last five years would be prohibited from visa-free travel to the United States.

Iranian officials claim that this violates the nuclear agreement because the United States pledged not to take any action that would harm Iran’s economic relations with other states.

This charge is spurious. Iranians or other travelers still could travel to the United States but would have to obtain visas first.

Moreover, the intention of Congress in passing this law clearly was to enhance homeland security by making it harder for terrorists to gain entry into the United States.

As the world’s leading state sponsor of terrorism, the Tehran regime has no legitimate grounds for complaining about the law. But it cynically has harped on the issue in order to signal that any future sanctions on Iran passed by Congress will be treated as a pretext to walk away from the nuclear deal.

Iran’s exaggerated claims are understandable as part of its efforts to lock in maximal benefits from the nuclear deal.

But much less understandable is the Obama administration’s obsequious acceptance of Iran’s questionable claims.

Secretary of State John Kerry, rather than rejecting Tehran’s disingenuous complaints, instead sought to reassure Iran that it would escape any repercussions from the law.

Kerry wrote a letter to Iranian Foreign Minister Mohammad Javad Zarif in which he noted that the administration had the authority to protect Iran from the consequences of the new law:

“[W]e have a number of potential tools available to us, including multiple entry ten-year business visas, programs for expediting business visas, and the waiver authority provided under the new legislation.”

This timorous effort to appease Tehran on the visa issue is incredible at a time when Iran feels free to flout U.N. Security Council resolutions banning the testing of ballistic missiles, stonewall the International Atomic Energy Agency’s investigation of its past nuclear weapons activities, and arrest U.S. citizens visiting Iran and convict them on trumped up charges.

Rather than push back against Tehran’s unacceptable policies on these issues, Kerry’s State Department in effect has become Iran’s lawyer, protecting it from the consequences of its own actions.

The chairman of the House Foreign Affairs Committee, Rep. Ed Royce, R-Calif., complained that “instead of bending over backwards to try to placate the Iranian regime, the White House needs to be holding it accountable for its recent missile tests, its continued support for terrorism, and its wrongful imprisonment of Americans.”

But this may be too much to ask for from a feckless administration that is primarily motivated by a “fear of undoing a legacy achievement,” as a highly critical Washington Post editorial pointed out on Sunday.