Why Franklin Graham Is Leaving the GOP 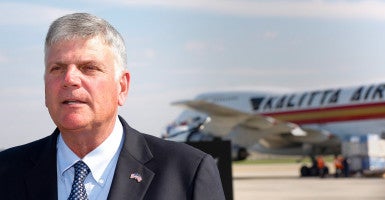 Less than one week after Congress passed a massive year-end spending bill that failed to strip Planned Parenthood of its taxpayer dollars, evangelist Franklin Graham announced he is leaving the Republican Party.

“Shame on the Republicans and the Democrats for passing such a wasteful spending bill last week,” Graham wrote Monday on Facebook. “And to top it off, funding Planned Parenthood!”

Graham, CEO of Samaritan’s Purse and the Billy Graham Evangelistic Association, said Republicans’ failure to defund Planned Parenthood is an “example” of why he is declaring himself an independent.

In declaring his separation from the Republican party, Graham referenced a string of undercover videos that came out this year showing Planned Parenthood employees discussing the sale of body parts from aborted babies. Graham compared the actions in those videos—which some claim were highly manipulated—to Nazi concentration camps.

“Seeing and hearing Planned Parenthood talk nonchalantly about selling baby parts from aborted fetuses with utter disregard for human life is reminiscent of Joseph Mengele and the Nazi concentration camps!” he said.

The undercover videos, produced by the Center for Medical Progress, sparked calls by conservatives to defund Planned Parenthood of the more than $528 million it receives in taxpayer dollars. The majority of that money comes from federal reimbursements it receives through Medicaid contracts.

Conservatives made stripping Planned Parenthood of its taxpayer dollars a top priority this congressional year yet failed to include any defund provisions in the year-end spending bill.

>>> Read More: How Your Senators Voted on the Government Spending Bill

Democrats praised the $1.1 trillion omnibus spending as a “good compromise,” highlighting the more than 150 conservative policy riders that they were able to “nix” from the final agreement.

After the spending bill passed, Planned Parenthood touted in a press release that the budget deal included “no new harmful policy riders on women’s health.”

At the end of his post declaring his separation from the Republican party, Graham called on Christians “across the country to pray about running for office where they can have an impact.”

Shame on the Republicans and the Democrats for passing such a wasteful spending bill last week. And to top it off,…