What We Can Learn From Reagan About Celebrating Christmas 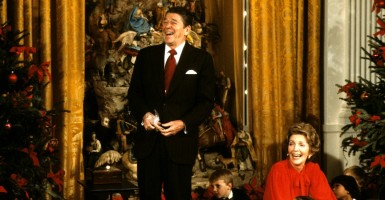 President Reagan and first lady Nancy Reagan during a Christmas children's event in the East Room of the White House in December 1981 (Photo: Dennis Brack/Newscom)

Whatever happened to peace on earth and good will to men? In times like these when I am thinking of moving to Canada, I turn to my favorite president—Ronald Reagan—who was blessed with the gift of serenity even in the worst of times. He was eloquent about how much we have to be grateful for and never more so than at Christmas time.

In his first Christmas message from the Oval Office in Dec. 1981, when unemployment was high and economic growth was low and communism seemed to be on the march around the world, Reagan talked about the national Christmas tree he could see from the White House. He said the lighted tree reflected the love that Jesus taught. (Yes, he actually used the word “Jesus.”) Like the shepherds and wise men of the first Christmas, “we Americans have always tried to follow a higher light, a star, if you will…. At times our footsteps may have faltered, but trusting in God’s help, we’ve never lost our way.”

In fact, we have shown the way to countless others. In his 1982 Christmas message, when the Cold War still burned hot in Central America and Asia, Reagan recounted how Ordnance Man, First Class John Mooney and his shipmates had picked up 65 Vietnamese refugees in the South China Sea. Risking all to escape Communist “reeducation,” the boat people had been at sea for five days and had run out of water when they spotted the aircraft carrier USS Midway. As they approached the ship, wrote Mooney, “they were all waving and trying as best they could to say, “Hello, America sailor! Hello Freedom man!’”

“I hope,” Mooney wrote to his family, that “we always have room [in America] for one more person …looking for a place where he doesn’t have to worry about his family starving or a knock on the door in the night… a place where they finally see their dreams come true and their kids educated and become the next generation of doctors and lawyers and builders and soldiers and sailors.”

An impossible dream? Not to Reagan, who after reading Mooney’s letter reminded his listeners – and us – that “in spite of everything, we Americans are still uniquely blessed, not only with the rich bounty of our land but by a bounty of the spirit—a kind of year-round Christmas spirit that still makes our country a beacon of hope in a troubled world.”

In his 1983 Christmas message, shortly after terrorist attacks on a Marine barracks in Lebanon had killed 241 American servicemen, Reagan asked Americans to pray “for our soldiers who are guarding peace tonight.” With patience and firmness, he said, “we can help bring peace to that strife-torn region and make our own lives more secure.” Note he said “help,” not suggesting that America should or could bring peace all by herself.

In his 1985 Christmas message, shortly after his first meeting with the new Soviet leader Mikhail Gorbachev in Geneva, Reagan spoke of Jesus and the power of his love “that can lift our hearts and soothe our sorrows and heal our wounds and drive away our fears.” He reminded us that Jesus had promised “there will never be a long night that does not end.” Ever the optimist, Reagan came to believe that we could “trust” Gorbachev if we took steps to “verify” his promises.

In his 1986 Christmas message, when the Iran-Contra affair had just broken and his presidency was under strong attack, Reagan kept his faith in God. He did not question the motivations of his critics, but turned his cheek. He said that God’s commandment to love our neighbor as we love ourselves “is a commandment to respect the God-given rights of our fellow men.” He quoted the prophet Isaiah:

“He giveth power to the faint; and to them that have no might he increaseth their strength … they that wait upon the Lord shall renew their strength; they shall mount up with wings of eagles; they shall run and not be weary.”

In his 1987 Christmas tree message, soon after he signed the Intermediate-Range Nuclear Forces (INF) Treaty, eliminating for the first time an entire category of nuclear weapons, Reagan invited visiting Gorbachev to observe the very top of the tree.

As a small reminder of the spirit of Christmas, Reagan announced that the Star of Peace atop the tree would be lit day and night while “our Soviet guests are here. … Let the star remind us why we’re gathered and what we seek.” In his final Christmas tree message in Dec. 1988, Reagan said that none of us need feel lonely because “we are loved with the greatest love there has ever been or ever will be.” He urged us to be grateful for our freedom to worship as we please and to “redouble our efforts to bring this greatest of all freedoms … to all the peoples of the earth.”

As we come home to family and friends this Christmas, the president said, “let us all remember our neighbors who cannot go home themselves.” Our compassion and concern, he said with conviction, will mean much “to the hospitalized, the homeless, the convalescent, the orphaned” and will lead us to the joy and peace of Bethlehem. Looking around the nation and the world with all its problems and challenges, Reagan offered his final Christmas words: “For it is only in finding and living the eternal meaning of the Nativity that we can be truly happy, truly at peace, truly home.”

A merry and blessed Christmas to everyone!