Ohio Teachers Union Officials Paid Twice as Much as Teachers 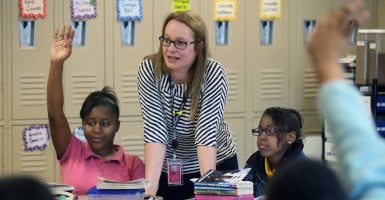 Ohio’s largest labor union is in the business of selling worker “solidarity,” and for union bosses, business is good.

Ohio Education Association president Becky Higgins was paid $209,039 to preside over a union that took member dues and mandatory fees from 121,625 teachers during the fiscal year ending Aug. 31.

The average chief executive officer in Ohio is paid $183,640—less than Higgins, whose job is to agitate for higher taxes to fund the public education system from which her living is siphoned.

“Where does the income for those salaries come from? When you think about where our forced dues go—we’re not a right-to-work state, so we have to pay—it really starts to make you upset,” Thompson said.

In many Ohio schools, teachers like Thompson who opt out of OEA membership are required to pay “fair share” fees to the union to have a job. Thompson has to pay OEA and its affiliates $600 per year.

“It is legitimate for rank and file union members to question these salaries and ask what exactly it is that they are getting in return for the money that is involuntarily pulled out of their pockets,” Lawson said.

Many of the union’s expenditures, Lawson added, “do nothing to advance the individual union members’ interests.”

“When not funding fat paychecks for leadership, they often go to fund special interest political efforts that frequently conflict with individuals’ beliefs,” he said.

The Buckeye Institute is a longtime supporter of making Ohio a right-to-work state, which would give every worker the ability to choose whether to pay a labor union.

In fiscal 2015, the 10 highest-paid OEA officers and employees were:

Including gross salaries and other disbursements, a total of 41 OEA officers and employees were paid more than $150,000. The union failed to respond to a request for comment from Ohio Watchdog.

Based on the latest U.S. Bureau of Labor Statistics data, the average annual wage for all Ohioans is $43,900.