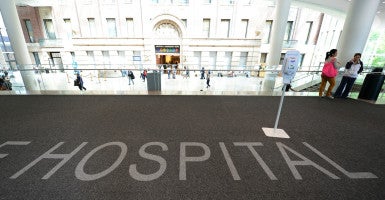 A new report found that increased regulatory control to the New York Department of Financial Services could have played a role in the collapse of Health Republic Insurance of New York, a co-op started under Obamacare that received $265 million in taxpayer-funded loans. (Photo: Anthony Behar/Sipa USA/Newscom)

A new report examining the collapse of Health Republic of New York, Obamacare’s largest co-op, said its failure—which may lead to a $265-million loss of taxpayer dollars—can be attributed in part to heightened regulatory control by the state.

According to the analysis from the Albany, New York-based Empire Center, a “breakdown” in oversight from the state Department of Financial Services and artificial cuts in Health Republic’s premiums may have led to the ultimate failure of the consumer operated and oriented plan, or co-op.

Of the 23 co-ops created under the health care law, just 11 remain.

“The rapid rise and costly fall of Health Republic Insurance of New York … is a cautionary tale for policymakers in Albany as well as in Washington,” the report’s author, Bill Hammond, wrote. “Despite heavy federal subsidies and robust enrollment growth, Health Republic lost money at such a clip that state regulators forced it to shut down as of Nov. 30, on barely two months’ notice.”

Health Republic, one of 23 co-ops implemented under Obamacare, sold the cheapest plans available on New York’s state-run exchange and enrolled more than 200,000 customers in coverage. According to the Empire Center, Health Republic offered consumers broad networks, and its plans were significantly cheaper than those sold by competitors like UnitedHealthcare and Aetna.

As a result of its low premiums, Health Republic experienced significant losses in 2014, as its customers’ medical claims and administrative costs outpaced the revenue it was bringing in through premiums.

“Although Health Republic’s premiums were already among the very lowest in the state—and though its financial report showed it was losing money—the fledgling company did not escape the state’s rate-setting knife,” the report said.

Health Republic did not immediately return The Daily Signal’s request for comment.

According to the Empire Center, Health Republic requested $243 million from the risk corridor program. However, the Centers for Medicare and Medicaid Services announced in October it would pay just 12.6 percent of the requested payments.

As a result, Health Republic, along with seven other co-ops, announced it would be closing its doors after experiencing significant losses and receiving lower-than-expected payments from the risk corridor program.

“Had New York’s regulators ordered higher rates for Health Republic from the beginning, the company could have avoided some of the steep losses that made it so dependent on risk-corridor funding,” Hammond wrote. “While it’s unclear that such action would have been enough to save the company, DFS’s rate-cutting, in retrospect, was unquestionably unproductive.”

Health Republic closed its doors Nov. 30, leaving some of its 215,000 customers to find coverage for a month—or go without—and secure new insurance for 2016 through the state-run exchange.

“If the goal is making health coverage more affordable, the surest way to achieve that objective is not for the state to impose price controls, but for it to roll back its own high taxes and costly coverage mandates,” the report said.