This Liberal City Is the First to Unionize Uber 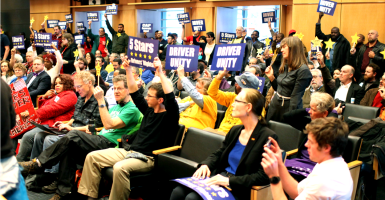 Last week, the Seattle City Council voted unanimously to extend collective bargaining powers to drivers for services like Uber and Lyft. It is the latest action by union groups and their political allies to stave off disaster for big labor, which has seen its membership roles dwindle to record lows as younger workers realize they do not need union bosses to have successful careers.

Unfortunately, Seattle’s city council does not see it that way. In its eyes, the only good job is a union job. The fact that the market disagrees—only 6.6 percent of private-sector workers are unionized, a record low figure—hardly fazes them.

Why Uber Drivers Are Not Standard Employees

The move to unionize Uber and Lyft drivers is a first in this country. These companies hire drivers as independent contractors, meaning they are not “employees” in the traditional or legal sense.

Each driver sets his own hours and is free to treat driving for Uber as a primary source of income or merely a supplement to wages earned elsewhere. They can even drive for multiple platforms, clocking in for a morning on the Uber app and then wrapping up the day giving rides to Lyft customers.

What’s more, rideshare drivers tend not to view driving for Uber or Lyft as a career. Only about 1 in 5 Uber drivers reports that Uber is their only source of revenue; fully half report that Uber merely augments their pay but is not a significant source of income.

In other words, these drivers’ professional experiences differ dramatically from the 9-to-5 standard. Rideshares are as much an “on demand” car service for consumers as they are an “on demand” job for drivers, who enjoy a degree of flexibility unheard of until quite recently.

That flexibility stands in stark contrast to the rigidity of unionized industries, where every aspect of the employer-employee relationship is dictated by union contract rather than the wishes or merit of the individual worker.

Some drivers are no doubt attracted by union promises of higher wages, benefits packages, and better working conditions. The luster of collective bargaining may wear off, though, when they realize that economic realities cannot be papered over: Driving up the cost of employing drivers will lead to ridesharing companies hiring fewer of them.

Those drivers lucky enough to get hired will be given two choices: Join the union, or find a job someplace else. Under Washington state law, union dues are compulsory even for workers who do not want collective representation, sapping the hard-earned wages of drivers to finance political campaigns that many drivers disagree with.

Politics aside, the mere fact that drivers must register with a union and pay dues will be a significant deterrent to joining the industry for many, particularly those who only want to put in a few hours as their schedule permits.

That will mean lost opportunities for young workers looking to earn extra money for student loan payments, for example, or those looking for income while they are between jobs. Right now these workers represent a significant percentage of rideshare drivers. In the unionized future, they may be shut out in favor of career drivers, similar to taxis today.

The Seattle law requires Lyft and Uber to provide the names, contact information, and home addresses of every driver on their platforms to a nonprofit “Driver Representative Organization,” which will then assess whether a majority of said drivers wants a union. The Teamsters were a significant force behind the collective bargaining legislation, and they will no doubt be a major player in the push to unionize rideshare drivers. Unions are not above threats and intimidation tactics to secure their goals.

The Effect on Consumers

Consumers will notice the ill effects, too. Companies will not eat the dramatic cost increases a unionized workforce entails; they will pass the costs on to consumers. Prices will rise, and quality will fall, since it is often notoriously difficult for employers to fire poorly performing union workers. These factors will likely drive down demand, making it even more difficult for ridesharing companies to sustain current levels of employment.

As a legal matter, Seattle’s new law is almost certainly going to be challenged in court, possibly as a violation of the National Labor Relations Act, which preempts city and state efforts to regulate union activities of company employees.

Yet Uber and Lyft drivers are not employees—they are independent contractors. As such, their efforts to unionize and subsequently to collectively set prices may run afoul of federal antitrust law.

As a policy matter, the net effect of Seattle’s decision to foist collective bargaining onto ridesharing will be to stultify a dynamic industry, changing its character from innovative bellwether of the 21st-century economy into a calcified rehash of the 20th century, a “Taxi Industry 2.0.”

The Seattle City Council euphemistically calls this process “giving drivers a voice.” It seems that Seattle has already decided what that voice should say.