Rand Paul Moves One Step Closer to Auditing the Fed 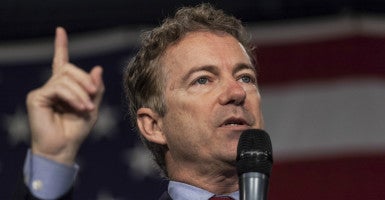 'The Fed operating under a cloak of secrecy has gone on for far too long,' Sen. Rand Paul said in a statement Friday. 'The American people have a right to know exactly how Washington is spending their money. The time to act is now.' (Photo: Brian Frank/Reuters/Newscom)

The Senate will vote on Sen. Rand Paul’s legislation to audit the Federal Reserve when Congress returns from recess in January.

The Federal Reserve Transparency Act of 2015 would expand congressional oversight of the nation’s central bank and give the Government Accountability Office the authority to review the Fed’s monetary policy decisions.

“The Fed operating under a cloak of secrecy has gone on for far too long,” Paul said in a statement. “The American people have a right to know exactly how Washington is spending their money. The time to act is now.”

Paul used a congressional maneuver to fast-track the legislation in November, allowing the bill to bypass committee approval and head straight to the Senate floor for a potential vote.

Twenty-four Republican senators have co-sponsored the bill, but Paul needs to clinch support from at least 60 senators to advance the legislation.

Federal Reserve Chairwoman Janet Yellen said earlier this year she “strongly opposed” legislation to audit the Fed because it would “politicize monetary policy” through “short-term political pressures” and undermine the bank’s independence.

Opponents of the bank argue that its reach extends too far and that the economy would expand if the Fed were constrained by rules.

The House took a step toward auditing the Fed in November after it passed similar legislation that would subject the bank to greater public scrutiny.

The Obama administration threatened to veto the bill spearheaded by Rep. Bill Huizenga, R-Mich., writing in a statement that the bank’s “independence is key to its credibility.”