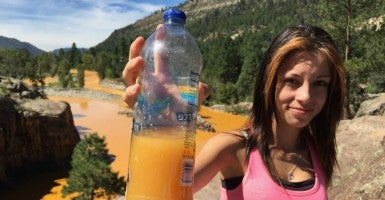 Rayna Willhite of Aztec, N.M., holds a bottle of water she collected from the Animas River after the Gold King Mine spill. (Photo: Jerry McBride/The Durango Herald / Polaris/Newscom)

On August 5, a crew from the Environmental Protection Agency caused a spill of 3 million gallons of water laden with mercury, arsenic, and other toxic metals from the Gold King mine into a river that supplies drinking water for three states.

While the EPA initially promised to hold itself accountable in the same manner that it would hold a private party, it is becoming increasingly evident that this assertion was not entirely accurate.

After the spill, the EPA commissioned an initial analysis of what happened from the Department of the Interior Bureau of Reclamation (BOR).

The Bureau of Reclamation found that the EPA hit a spring with a backhoe to cause the spill, but the report did not assign blame. Now, a new EPA report has the same failing, further showing that the EPA report is shirking responsibility for its actions.

In their report, the EPA claims it was engaged in only “careful scraping and excavation” with a backhoe outside the mine. “Just prior to finishing, a team noticed a water spout a couple of feet high in the air near where they had been excavating.”

The report goes on to say that the spout (that they just happened to notice) quickly turned into a gusher of yellow toxic water.

It seems the EPA would have us believe the mine erupted on its own (which is like arguing, but, Your Honor, I was just carrying the gun when it went off all on its own!).

The EPA’s report goes on to allege that the mine entrance (or adit) was larger than they “anticipated,” and the “fact that the adit opening was about 2 times the assumed 8 to 10 foot maximum adit height resulted in a closer than anticipated proximity to the adit brow, and combined with the pressure of the water was enough to cause the spout and blowout.”

In other words, the mine did it!

Is it possible that the spill was caused by the EPA being careless? Nope. The authors claim they were digging “to better inform a planned consultation” scheduled for nine days later.

Essentially, the EPA claims that the spill was an act of God, rather than its own fault.

Not a Good Argument

The EPA argument is unpersuasive for two reasons. For starters, the EPA has prosecuted private parties for the same conduct.

The government prosecuted Edward Hanousek, an employee of the Pacific Arctic Railway and Navigation Company, for conduct so similar to the EPA’s that one can simply switch out the nouns in the prosecutor’s closing argument that proved successful in that case.

It would seem to be just as apt to the facts of the Animas River spill:

“When [the backhoe operator] hit that unprotected [spring] and that [3 million gallons of toxic mine water] fired out of that [spring], sprayed up into the air, and got into that [Animas River], the[] defendants … [became] guilty of negligent discharging [acid mine water] into the [Animas] River.”

Second, although the initial Bureau of Reclamation report buries most of the facts that are relevant to the cause of the spill under 120 pages of superfluous information, the Bureau of Reclamation report includes just enough facts to make it clear that had a private party caused the Animas River spill, the government would probably have criminally prosecuted that party.

McCarthy said then that “we want to reassure everyone that the EPA does take full responsibility for the spill.”

It turns out that the federal government’s measure of “full responsibility” has typically meant that criminal charges will be brought for the same conduct by which the EPA caused the Animas River spill as long as only private parties are to blame. The truth is that the EPA has now made several attempts to evade responsibility.

First, the EPA allegedly “doctored” a video of the spill—getting “called on the discrepancy during a House committee hearing.”

Then the EPA commissioned a report from the Bureau of Reclamation that was designed to look credible—which, like a bad student term paper, was lengthy and full of unnecessary charts and illustrations—but recited just enough facts to stay relevant to the spill. And even those facts made the EPA look bad.

Now the EPA has published an eleventh-hour report that not only reads like a term paper written on the bus en route to school, but also evades responsibility almost entirely.

In a glimmer of honesty, the EPA report admits that “[i]n retrospect, and based on information learned [later],” the EPA’s team was “much closer [to the opening of the mine] when excavating on August 5 than they thought.”

This is like saying the Titanic was closer to an iceberg than the captain thought.

Heritage Foundation scholars initially argued that the EPA “should prosecute the subordinate and supervisory EPA officials in this case or stop bringing similar charges against private parties for their negligence.”

Had Hanousek worked for the EPA, it seems, he would never have been stigmatized and punished as a criminal.

After the Bureau of Reclamation report, we argued that “[s]omeone should ask the EPA and the Justice Department why the federal government discriminates in favor of government employees and against private parties.”

Now, after the EPA published its own report, it seems like Congress will have its work cut out for it if it’s going to get even so much as a meaningful acceptance of responsibility from this agency.