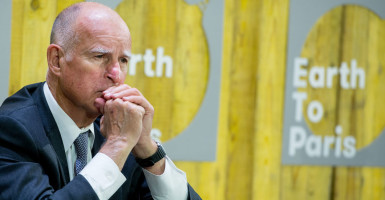 California Gov. Jerry Brown raised some eyebrows while attending the U.N. Climate Summit in Paris this month, proclaiming that the “coercive power of the central state” is needed to promote good public policy, specifically when it comes to a cleaner environment.

After Steyer mentioned business frameworks, Brown said, “Tom, you used the phrase ‘policy.’ Good policy. But I want to unpack that term a little bit. Inside the policy, you need a law. You need a rule. You need the coercive power of government to say, ‘Do this.’ Now, you have to be wise and don’t say something stupid or order something stupid, but the fact is, the regulations supported by the laws drive innovation.”

The Sacramento Bee reported that Brown later urged a small crowd to “never underestimate the coercive power of the central state in the service of good.”

“You can be sure California is going to keep innovating, keep regulating,” the 77-year-old Democrat said. “And, shall I say, keep taxing.”

The Brown administration has been aggressive in instituting stricter environmental laws and regulations in California.

In October, the four-term governor signed legislation calling on California to generate half of its electricity from sources such as solar and wind by 2030. At the same time, the law mandates that homes, offices, and factories double their energy efficiency.

Such moves have prompted opposition from the energy industry, saying they will raise utility bills and gasoline prices, and Brown’s comments in Paris drew a swift reaction from critics, who seized on the “coercion” remark.

“Gov. Brown’s statement is a frank admission that politicians and government in the U.S. are out of control,” said Dan Kish, senior vice president at the Institute for Energy Research, a public policy organization that calls for free-market solutions on energy policy.

“The governor bragged about the ‘coercive powers of government’ and how his state would keep regulating and taxing. The United States was formed to put citizens in charge of their lives by putting a fence around government power and control,” Kish said in an email to Watchdog.org.

“Gov. Brown has shown he thinks people should be inside the fence, with government, and their crony business partners, using its coercive and taxing powers to make them do what the politicians say, and it’s illustrative he is doing it at the Climate Summit in Paris. This is how freedom is lost and tyranny and coercion prevail.”

Brown made the remarks in a discussion about reducing greenhouse gas emissions.

“This is an art and a science,” Brown said. “You have to push business further than they want to go, but within their capacity to reach it.”

Clean power companies have long been criticized for their reliance on federal and state subsidies and tax credits, with the bankruptcy of California-based solar company Solyndra used as a prime example. The U.S. Department of Energy awarded Solyndra $536 million in loan guarantees prior to the company’s collapse in 2011.

Green energy advocates have defended the subsidies, arguing that fossil fuel industries have long received tax credits and that government help is often a necessity to launch companies that require large start-up costs.

“Just as with any other major economic transition—the Industrial Revolution, the Marshall Plan, the fall of Communism—there is a role for government policy, finance and investment in speeding the adoption of the new, while easing the phaseout of the old,” Kate Gordon, vice chair at the Paulson Institute, said in an opinion piece in the Wall Street Journal earlier this year.

At a news conference in Paris, K.R. Sridhar, CEO of the fuel cell technology company Bloom Energy, said it would be wrong to single out renewable companies, saying that taxpayers pay for highway and road maintenance that benefits gasoline-powered cars.

Clean technology, the Bee quoted Sridhar, only needs a “helping hand,” not a permanent subsidy. “For us,” Sridhar said, “it’s a feeding bottle and not an addiction bottle.”