Despite Earmark Ban, Lawmakers Find a Way to Include Pet Projects in Spending Bill 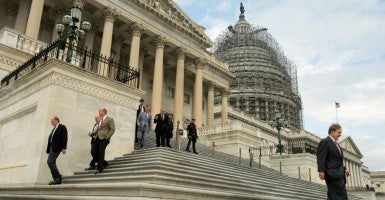 Four years after the House passed a ban on earmarks, lawmakers have found a way to skirt the prohibition and incorporate their own pet projects into massive pieces of legislation, and the $1.1 trillion omnibus passed today is no different.

The House first approved a ban on earmarks in 2011, with the Senate soon after following suit, after seeing upticks in the number and size of earmarks in the 1990s and 2000s.

Despite the moratorium, the practice hasn’t disappeared completely in the years since Congress passed the earmark ban. Lawmakers in the House and Senate have discussed ending the ban as a way to shift spending power from the president back to Congress, those in favor of ending it say.

Now, members have since found subtle ways to tuck pet projects into massive pieces of legislation such as the 2,000 page omnibus released to lawmakers early Wednesday morning.

Included in the $1.1 trillion government spending bill, signed by President Obama today, are a number of provisions serving members’ districts and interests.

Sen. Richard Shelby, R-Ala., secured a number of pet projects for his home state in the original text of the omnibus released to members earlier this week. However, at least one of his provisions was stripped out after objections from other members.

Shelby, the chairman of an Appropriations subcommittee and senior member of the panel, touted his success in inserting a measure allowing the Alabama-based United Launch Alliance, a joint venture between Boeing and Lockheed Martin that builds rockets, to continue buying rocket engines from Russia.

Shelby defended the inclusion of the provision regarding the Russian-made engines, saying the language simply modified that included in the Senate Defense Appropriations mark-up from several months ago, and stressing that while he’s an advocate of American-made rocket engines, an alternative won’t be ready for five years.

“The language included in the omnibus would reverse the reckless restriction put on the use of the RD-180, which undermines our national security. This language directly addresses the concerns of our nation’s military leaders who argue that there will be a multi-year gap in access to space for national security launches under current policy,” Shelby said in a statement to The Daily Signal. He continued:

“While I strongly believe that we should not be dependent upon any foreign power for access to space, it is far too risky to ban the RD-180 until we have a domestically-produced engine that has the same capabilities.”

In addition to negotiating the provision governing the sale of Russian rocket engines, Shelby attached language to the government spending bill that affects a dispute between Alabama and Georgia over regional water rights.

According to National Journal, Shelby’s provision was removed from the bill after lawmakers in the Georgia delegation objected.

Despite the inclusion of his pet projects—though Shelby’s office noted that his provisions don’t cost taxpayers any money—in the $1.1 trillion spending bill, Shelby opposed it.

Also included in the bill was nearly $948 million to the General Services Administration for the construction of federal courthouses in a number of cities, including Nashville, Tenn.; Toledo, Ohio; Charlotte, N.C.; Des Moines, Iowa; Greenville, S.C.; Anniston, Ala.;, Savannah, Ga. and San Antonio, Texas.

The inclusion of the funding for the courthouses garnered praise from Sen. Lamar Alexander, R-Tenn., and Rep. Will Hurd, R-Texas, who represent the cities and states where the courthouses will undergo construction.

“This accomplishment is a real win for the people of San Antonio and has significant impacts on the city’s immediate future including security, economic development, and tourism,” Hurd said in a statement. “I’m glad I was able to help drive a big-picture initiative for my hometown.”

Both Hurd and Alexander contended that the current courthouses in their home states were in poor condition and have security concerns. However, the Government Accountability Office has in the past warned of waste in the construction of federal courthouses.

In a 2010 report, the Government Accountability Office reported that the General Services Administration—which receives the money for federal courthouse construction—built an extra 3.5 million square feet of space that cost $835 million to build and $51 million per year to operate.

Similarly, a 2013 report from the Government Accountability Office called on the General Services Administration to increase transparency in courthouse construction to better reflect the costs to taxpayers.