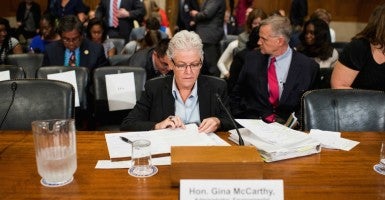 Federal agencies are probably celebrating today. They just learned there’s pretty much nothing they can do, including allegedly breaking the law, that will earn the wrath of Congress.

The Government Accountability Office, the federal government’s arbitrator on the use of appropriated funds, issued a legal opinion finding that the Environmental Protection Agency broke the law when developing its controversial new water rule. This rule would allow the EPA and U.S. Army Corps of Engineers to regulate almost any water, including certain man-made ditches and so-called waters that are dry land most of the time.

According to the GAO, the EPA engaged in improper lobbying and covert propaganda. The agency’s activities didn’t just focus on getting support for its rule. They also sought to impact Congress and the legislative process by encouraging opposition to legislation that would undermine the rule.

Bear in mind, there already was massive opposition to the rule before this GAO opinion, leading many to believe that Congress would withhold funding for the water rule. The GAO opinion was thought to be the final nail in the rule’s coffin.

Congress instead did nothing.

Imagine members of Congress, for example, having to tell farmers it will be more difficult for them to engage in ordinary farming activities or informing county leaders that critical infrastructure to protect public safety could be at risk.

Now these same members of Congress will have to tell their constituents that they didn’t take action to block the water rule, even though, according to the GAO, the EPA broke the law. Plus, such a provision should have been easy to address in the spending bill.

The massive spending bill is apparently a foregone conclusion, but any member of Congress concerned with the rule of law, separation of powers, and the very institution of Congress should expect that the water rule will be addressed in the spending legislation.

Withholding funding for this rule is quite simply about far more than the problematic rule itself. Congress is setting up a dangerous precedent. Agencies are already empowered to generally do what they want to do because Congress doesn’t properly hold them accountable. Now that possible law-breaking is being overlooked, let the chaos begin.

Even if funding is blocked, this doesn’t mean the EPA and the Corps couldn’t immediately start developing a new rule. Congress should make sure that any rule properly protects the environment and property rights and is consistent with the language of the Clean Water Act. Further, it shouldn’t be too much to ask that the EPA doesn’t break the law.

Right now, the EPA is making Congress look foolish, or maybe Congress is doing that to itself. The legislative branch is supposed to be the strongest branch of government. This may no longer be reality.