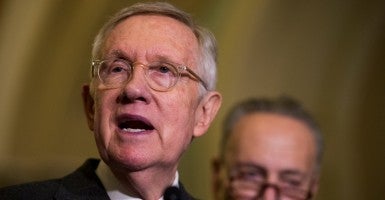 Democrats are counting their victories in the number of conservative policy riders not included in the Omnibus bill. (Bill Clark/CQ Roll Call/Newscom)

Hours after the mammoth spending bill dropped, Democrats are counting their triumphs, outlining conservative policy riders and priorities that were not included in the final spending bill.

The omnibus deal isn’t perfect, but a good compromise for the American people. It could have been a lot worse if it weren’t for our efforts.

Early Wednesday morning, the Democrats of the House Appropriations Committee released a summary detailing Republican provisions left out of the bill.