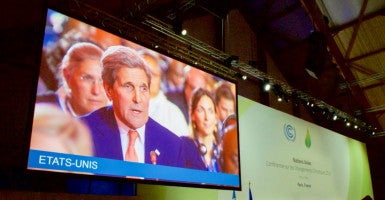 Secretary of State John Kerry addresses delegates from 196 countries after they approved a sweeping environmental agreement during the climate change conference in Paris.(Photo: State Department/Sipa USA/Newscom)

What better time than Christmas to spend other people’s money and give presents to the environmental activists?

In addition to the other generous handouts renewable companies would receive in the omnibus spending bill, backroom negotiators are also pushing for President Barack Obama’s $3 billion pledge for the Green Climate Fund, a key component of the Paris climate change talks.

Agreeing to allocate taxpayer dollars for the Green Climate Fund is effectively giving a congressional stamp of approval to the Paris Protocol. Congress should this reject this funding entirely.

According to Bloomberg, the trade-off for lifting the decades-old ban on crude oil exports would be authorizing $3 billion for the Green Climate Fund.

The Green Climate Fund is nothing more than a taxpayer-funded wealth transfer from developed countries to developing ones.

Lifting the ban on crude oil is good policy. Allowing U.S. energy exports would provide a boon to the American economy, creating jobs, expanding the economy, and strengthening relationships with global trading partners. Removing restrictions on energy exports would improve national security and geopolitical conditions around the world by reducing any one nation’s ability to manipulate energy supplies for political or economic influence.

But, as my colleague Rachel Bovard noted, lifting the ban on crude oil already has bipartisan support, and “extortion should not be the standard we set for implementing internationally strategic, broadly supported, job-creating policies.” In other words, this in an unfair trade-off: A bipartisan-backed policy is being traded for a liberal policy.

The Green Climate Fund is nothing more than a taxpayer-funded wealth transfer from developed countries to developing ones. The purpose of this fund is to subsidize green energy and pay for other climate adaptation and mitigation programs in poorer nations—and to get buy-in (literally) from those poorer nations.

Nor are lawmakers’ hands tied: The final agreement contains no legally binding commitment for the green fund. The fund is a wasteful use of taxpayer money and unproductive. Large wealth transfers ignore the underlying problems that trap countries in low levels of growth and depressing standards of living. Green climate funds ignore the fact that access to affordable, reliable baseload electricity will help lift people out of poverty and equip them to handle weather-related events, no matter what the cause.

And bureaucrats would likely use the $3 billion to play with to fund their pet green projects, perhaps giving rise to more cronyism.

Furthermore, lawmakers shouldn’t think this will end liberals’ quest for money for climate change: Climate negotiations leading up to the Paris conference called for a Green Climate Fund that would collect $100 billion per year by 2020, with the U.S. being the largest contributor.

Thirty-seven senators and 110 members in the House sent letters to voice their opposition to funding the Green Climate Fund without Obama submitting the Paris agreement to the Senate for consent. The Senate letter states that “we pledge that Congress will not allow U.S. taxpayer dollars to go to the Green Climate Fund until the forthcoming international climate agreement is submitted to the Senate for its constitutional advice and consent.”

Congress should not have to trade for bad policies that would preserve green cronyism domestically and abroad to lift the ban on crude oil exports. To be clear, lifting the export ban is the right policy, but this is a raw deal for Americans.

It is clear that policymakers have missed an important opportunity to prohibit the use of any taxpayer money toward the UN’s Green Climate Fund but failed to do so.