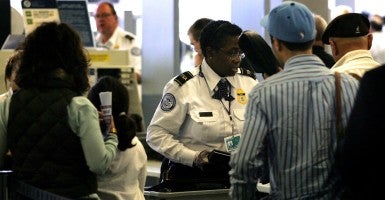 Marc Frey has served in several senior positions at the U.S. Department of Homeland Security, including as the director of the Visa Waiver Program. Currently, he is a senior director at the international law firm Steptoe & Johnson.

Following the terrorist attacks in Paris last month, commentators have speculated on the possibility of an attack on U.S. soil by terrorists possessing passports from France or other Visa Waiver Program (VWP) countries. Many in the media and elsewhere continue to labor under the misimpression that security standards are looser for VWP travelers than for those traveling with a visa, and that this poses a threat to U.S. national security.

To take a prominent recent example, a recent Wall Street Journal op-ed argues that only “perfunctory” security checks are performed on VWP travelers and concludes that because the VWP lacks “the extra layers of security attached” to the visa process, VWP travelers are able to enter the United States “with nothing more than their passports.”

This type of reasoning indicates a serious misunderstanding of the many security elements that make up the VWP and how these elements fit into and enhance DHS’ larger border security and screening procedures.

Under the VWP, the Department of Homeland Security (DHS) waives the “B” non-immigrant visa requirement for aliens traveling from the 38 approved countries, permitting stays of up to 90 days for business or tourism. A consular interview is not required.

The participating countries are close U.S. allies in Europe, Asia, and Latin America that meet exacting counterterrorism, law enforcement, border control, aviation, and document security standards. For example, in order to maintain its eligibility, each country must ensure that its passports and travel documents comply with technical standards that prevent forgery.

What’s more, the VWP enables the U.S. government to audit the member country’s security standards and capabilities on a regular basis, including those to prevent radicalization and identify foreign fighters. No other program provides the U.S. government with the opportunity to conduct as far-reaching and consequential audits of foreign security operations, ensuring alignment with our high standards for managing risk.

Before boarding a flight to the United States, each traveler under the program is individually screened—via the Electronic System for Travel Authorization (ESTA)—against multiple law enforcement and terrorism databases. These are the same databases used for visa applicants, and security is greatly enhanced when those databases include information from foreign governments.

Like any successful security program, VWP has been closely reviewed over the years, undergoing reform and modernization as new threats arise. Most significantly, in order to align with the recommendations of the 9/11 Commission, additional security requirements were added to the VWP in 2007, including standards for secure travel documents, individualized pre-screening of travelers, bilateral information-sharing arrangements, prompt reporting of lost and stolen passports, and a threat assessment conducted by the director of National Intelligence.

It is essential that we continually look to identify possible enhancements to the VWP in the face of current threats, much as DHS continually evaluates participating countries and recommends improvements to their security postures. There are a number of sensible ways to strengthen the VWP.

For example, DHS and Congress must ensure that participating countries are fully meeting their information-sharing obligations. Other options to strengthen the program include steps that DHS can take unilaterally, such as adding new data fields to the Electronic System for Travel Authorization, as the Department has done twice in the last year, or further tightening passport requirements for travelers. Related, DHS should look to expand other programs that would supplement VWP security cooperation and facilitate travel, including the Global Entry, Immigration Advisory, and Preclearance Programs run by U.S. Customs and Border Protection (CBP).

Other sensible measures may require or benefit from legislative action, such as upping the frequency of eligibility reviews and/or designating “high-risk” countries; codifying aviation security standards, including the use of federal air marshals; and requiring participating countries to screen travelers against databases, such as INTERPOL’s Foreign Fighter database or its Stolen and Lost Travel Document database. The House of Representatives recently passed a bill by an overwhelming, bipartisan margin that addressed most of these elements.

However, requiring VWP travelers to submit biometrics (photographs or fingerprints) prior to boarding a flight, as some have suggested, would not meaningfully improve the security of the VWP. To the contrary, it would result in enormous resource, logistical, and diplomatic challenges that would adversely affect the program as a whole. Biometrics are currently collected for VWP travelers at the port of entry and run against watch lists and other security and law enforcement databases.

Last year, U.S. Customs and Border Protection confirmed that this resulted in the denial of entry to 479 individuals (out of more than 20 million VWP travelers) not otherwise identified by biographic vetting. None of the 479 hits was national security-related.

Likewise, any measure that would curtail the program even temporarily would be damaging and wrongheaded. Rather than enhance U.S. security, such a step would undermine it, resulting in the loss of significant leverage over the security standards of both current and prospective members, to say nothing of the severe economic and diplomatic consequences.

Suspension of the Program Would Undermine Security

For current VWP members, suspension of the program would undermine current information and intelligence-sharing mechanisms and deprive the U.S. of visibility into their security practices. It would also undermine relationships with our closest allies in the face of common threats, including ISIS. For prospective members, the disappearance of the program would remove a powerful and proven incentive to elevate security standards and to enhance cooperation with the United States on security matters. A number of countries, for example, have unilaterally upgraded to e-passports so as to be eligible for the VWP.

Likewise, several prospective members have signed the information-sharing agreements and otherwise increased law enforcement and security-related cooperation with the United States in the hopes of meeting the program’s requirements. These actions provide tangible security benefits to the United States and to the international traveling public well in advance of potential VWP designation.

Overall, the VWP has proven to be an effective leverage point for raising and maintaining security standards while providing unprecedented levels of information sharing and access, allowing the United States to know far more about participating countries and their citizens.

That the modernized VWP enhances U.S. security is widely recognized by security experts across the political spectrum. The last three secretaries of homeland security, for example, have praised the program’s contribution to U.S. and international security.

Indeed, for precisely that same reason, both the Bush and Obama administrations have added countries to the VWP. The VWP’s security components make so much sense, in fact, that they are setting global standards for countering terrorist travel. A Sept. 2014 U.N. Security Council resolution on security measures to better track and deter terrorist travel activity reflects many practices the VWP has enforced for member countries since 2008.

Critics of the program mistakenly continue to claim that the VWP compromises security, when in reality the program helps to keep the U.S. secure by fostering international alliances, enabling valuable security partnerships, and providing intelligence that helps stem the terrorist threat.