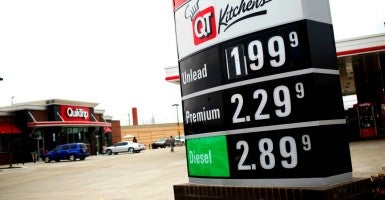 Congress recently passed a bill that would lift the crude oil export restriction, but President Barack Obama has threatened to veto it.(Photo:iStockphoto)

The repeal of two costly federal restrictions would lower the price of gas by 31 cents a gallon and save a typical American family $247 per year.

One of the restrictions is the ethanol mandate. Officially known as the “Renewable Fuel Standard,” it requires that massive amounts of corn be processed into ethanol, which is then mixed into gasoline and sold to consumers. Ethanol is less efficient and more expensive, gouging Americans at the pump. Adding insult to injury, so much farmland has been devoted to growing corn for ethanol that it has increased the price of food as well.

>>>To Read the Full Study: Costly Mistakes: How Bad Policies Raise the Cost of Living.

Similarly, the ban on exporting crude oil export hurts the U.S. energy industry, drives up the cost of gas, and lowers incomes for American workers. Thanks to hydro-fracking, the U.S. is now producing a lot of light crude oil, which is not what American refineries on the Gulf Coast were built to handle. This high-quality light crude oil could be refined more efficiently overseas, and the resulting gasoline would then be sold back to American consumers at lower prices.

Congress recently passed a bill that would lift the crude oil export restriction, but President Barack Obama has threatened to veto it.

Both restrictions are harmful to the American family—they produce little benefit at great expense. Repealing and reforming these two restrictions, plus ten other policy mistakes, would save American households $4,440 per year.