Paris Conference Leaders Want You to Think the Planet Is Facing a Climate Change Crisis. That’s Not True. 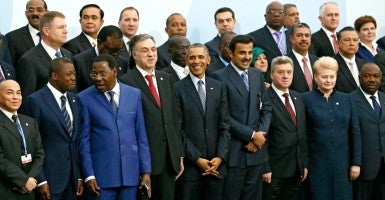 PARIS—Leaders from around the world, including President Barack Obama, have been saying that the COP21, also known as the Paris climate conference, is the last best hope to save the planet from catastrophic warming.

History shows us that this isn’t the only time international leaders have cried that the sky is falling when it comes to global warming.

French President François Hollande said last week that “[n]ever have the stakes of an international meeting been so high, since what is at stake is the future of the planet, the future of life.”

Obama echoed those sentiments in his opening remarks, claiming that “there is such a thing as being too late. And when it comes to climate change, that hour is almost upon us.”

In 2011 in Durban, Rev. Dr. Olav Fykse Tveit, the World Council of Churches general secretary, called the United Nations UNFCCC COP17 meeting the “last opportunity for the international community to be responsible in addressing climate change.”

If we do not reach a deal at this time, let us be in no doubt: once the damage from unchecked emissions growth is done, no retrospective global agreement in some future period can undo that choice. By then it will be irretrievably too late.

Stavros Dimas, European Union environment minister, warned the world that “Copenhagen [is] the world’s last chance to stop climate change before it passes the point of no return.”

Philip Clapp, head of the Washington-based National Environment Trust, said that 2007 was the imperative deadline for countries to reduce greenhouse gas emissions: “The scientists are telling us that this is the world’s last shot at avoiding the worst consequences of global warming.”

You get the point.

Virtually every international global warming summit has been deemed the last chance for the world. Dismissing problems of world poverty, hunger, disease, and terrorism, leaders have claimed that climate change is the world’s greatest problem.

The climate data simply does not suggest that man-made global warming should be at the top of the list of concerns. The climate models international bodies are using to justify regulations and commitments to restrict the use of affordable energy to reduce carbon dioxide are over-predicting warming.

Even studies that have attempted to refute the 18-year pause in global warming show that the temperature trend is much less than that projected by climate models. And even though man-made greenhouse gas emissions have increased, the world has not experienced trends in the increased frequency or magnitude of extreme weather events.

Although the media and international leaders have hyped the Paris climate conference as the last chance to save the planet, 2015 is not very different from most of years’ worth of failed negotiations.

What is different in 2015 compared to past years is that the Obama administration is unilaterally imposing carbon dioxide regulations on America’s energy sector. The administration’s regulations on new and existing power plants are perhaps the most harmful example of Obama’s push to regulate CO2.

The regulations will drastically shift the energy economy away from coal, which provides approximately 40 percent of America’s electricity. Restricting the use of that affordable, reliable energy supply will raise electricity rates, and those higher prices will reverberate through the economy, resulting in hundreds of thousands of jobs lost and tens of thousands of dollars lost for American households.

When it comes to global warming, the sky isn’t falling.

But if the administration continues to drive up energy costs for families and businesses with top-down climate regulations, economic growth and the rate of employment certainly will fall.