Fired for Refusing to Call a Biological Girl a Boy, This Teacher Is Claiming Religious Discrimination 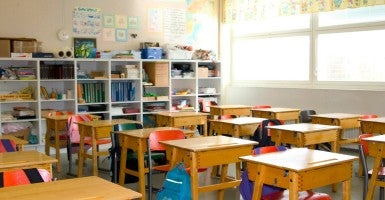 This fall a, teacher was fired in Texas for not referring to a 6-year-old girl as a boy.

Madeline Kirksey was, until recently, a manager at Children’s Lighthouse Learning Center on Clay Road in Katy, Texas, a town just to the west of Houston.

One girl had been attending the school for several months. After leaving school one Friday named “Sally,” she came to school on Monday with a new haircut, claiming to be named “Johnny.” Kirksey was fired after refusing to refer to the female child as a male or call her Johnny. Kirksey now claims that this firing was religious discrimination.

Ironically enough, Kirksey was fired on the same day Houston residents defeated the so-called “Houston Equal Rights Ordinance,” which could have allowed people identifying as the opposite sex to use public bathrooms and locker rooms of the opposite sex.

According to Breitbart, following Kirksey’s firing, the Learning Center distributed a set of rules and guidelines to all of the teachers on how to handle transgenderism among the students. The guidelines, developed by a special interest group, the International Foundation for Gender Education, instruct the teachers to defend the student’s dignity and to let themselves be told by the students which pronouns to use in reference to the students. Additionally, the guidelines call for the teachers to “be an advocate for the student[s]” against their own parents.

The guidelines state that educators “are often more knowledgeable” than parents and that parents can be “terribly cruel to their children who express transgender inclinations.”

Commenting on the new guidelines, Kirksey told school administrators that she did not think it was the school’s job to force its beliefs onto the students, or the student’s parents. She also stated that being forced to do so violated her religious beliefs.

Both Texas and the federal government have laws against religious discrimination in employment. Both Title VII of the Civil Rights Act of 1964 (a federal law) and the Texas Labor Code prohibit employers in Texas from engaging in such discrimination and require reasonable accommodation of religious beliefs.

Kirksey has decided to file a complaint with the federal Equal Employment Opportunity Commission (EEOC), the first step in an anti-discrimination claim against the learning center. She claims that she was wrongfully terminated on the basis of her religious beliefs.

Kirksey also reasoned that following the new guidelines would create an unhealthy environment where the students are encouraged to change their gender and bathroom preferences willy-nilly. She noted, for example, that the child previously known as Sally joined the boy’s football team after naming herself Johnny. Upon getting hit, however, the child cried and said, “I’m really not a little boy.” While these concerns are not necessarily relevant to Kirksey’s claims of discrimination, they illustrate that the school has much to consider in crafting good educational policy.

Students should all be treated fairly in the classroom, and school districts and private educational facilities do have the right to set their own curricula and policies. However, our system of government protects the traditional religious beliefs of all Americans, and forcing gender ideology upon objecting schoolteachers is the wrong way to go. It isn’t difficult to accommodate all parties here: It seems quite reasonable to allow teachers simply to refer to all students by their last name, if they so choose.

Expecting our teachers to be able to keep up with each child’s daily gender choices is a dangerous path to follow. The purpose and focus of a school should be on a child’s academic education, not on sexuality or gender. As Dr. Paul McHugh, former chief psychiatrist at Johns Hopkins Hospital, has argued, inculcating children with notions about gender change is often harmful; in that respect, it is not just that speaking about gender in the classroom is not usually germane to pedagogy, but that speaking falsely about gender is positively harmful.

Madeline Kirksey’s record as an academic teacher appears otherwise unblemished, and she should be allowed to continue with her teaching career.