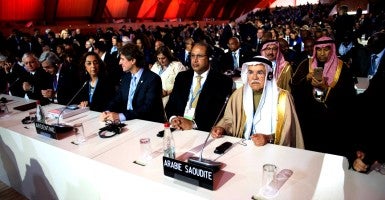 Delegates at the opening session of the Pairs Conference on Climate Change. (Photo: Pool/Sipa USA/Newscom)

PARIS—Proponents of an international global warming treaty are optimistic that this final week in Paris will generate an ambitious, legally binding treaty, with lots of cash flowing from the developed world to developing ones.

History, however, shows that the framework for international global warming summits is unworkable.

The past several years have seen successive annual United Nations conferences frantically trying to reach agreement among nearly 200 countries on a successor agreement to the Kyoto Protocol.

In essence, these conferences have succeeded only in wresting vague pledges from developed countries to reduce emissions and contribute funds to help developing countries adapt to climate change—but not nearly as much as proponents of a $100-billion-per-year Green Climate Fund want.

The same hope for a binding commitment to reduce carbon dioxide and other greenhouse gas emissions is alive this week in Paris, but the same pitfalls remain.

International negotiations still center on placing the economic burden of addressing climate change on a few dozen developed countries while asking nothing much from more than 100 developing countries.

China, for instance, has already lied about its carbon dioxide emissions output and shouldn’t be trusted to follow through with CO2 reductions, nor with reporting accurately in the future.

Developing countries will, however, certainly follow through in spending other peoples’ money.

The question is how much money—and will it be enough to reach a deal?

The Daily Mail reports that “the basic” group of countries, Brazil, South Africa, India, and China, have issued a statement calling for a legally binding and ambitious deal, and calling on rich countries to “substantially scale up” finance (another sticking point) to help developing countries cope with climate change.

They also call for developed countries to take more action before 2020.

Despite the calls and promises for increased transparency and productive spending, history tells us that’s also unlikely to occur.

Congress is right to be skeptical and should stop the tens of billions of dollars the Obama administration is seeking to contribute to the fund.

Most importantly, the international community shouldn’t encourage the developing world to divert resources to reduce greenhouse gas emissions; they should be encouraging developing countries to use all sources of energy, increase standards of living for their people, and address real environmental problems such as air and water contamination.

These countries should use scrubbers to reduce soot and smog and establish and enforce private property rights to protect land and water resources. While none of those activities has anything to do with reducing carbon dioxide, a colorless, nontoxic gas, all of them will improve the environment in the developing world.

Congress and the next administration should say au revoir to participation in these global warming negotiations once and for all. It’s time for the United States to remove itself from the United Nations Framework Convention on Climate Change altogether.