Why Conservatives Should Not Join Student Protesters’ Fight Against Woodrow Wilson 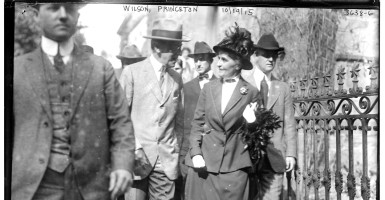 The arch-progressive Woodrow Wilson is under attack—but conservatives should not join the fray. Wilson is the latest target of modern liberalism in its war against the past. Our 28th president has recently drawn the ire of student protesters at Princeton, who want to scrub the university clean of his name and image because of his views on race.

Wilson’s presence looms large on the Princeton campus, where he was a professor and later served as its president from 1902 to 1910.

Though conservatives rightly disdain Wilson’s progressive politics, joining the protesters’ crusade validates their project of remaking society in their own image.

The protesters got one thing right: Wilson’s views on race should be condemned.

As president, he re-segregated the federal civil service, arguing that “segregation is not a humiliation but a benefit.” He had a private screening of D.W. Griffith’s The Birth of a Nation, a paean to the Ku Klux Klan—which was the first movie ever shown in the White House.

He believed that history progressed in a moral direction by way of races, not individuals. This was combined with a fervent belief in Social Darwinism, which runs rampant throughout his writings and speeches.

In a 1912 presidential campaign speech, Wilson pleaded with his audience that “in an era when ‘development,’ ‘evolution,’ is the scientific word,” he simply wanted “to interpret the Constitution according to the Darwinian principle.”

Though a good case can be made in light of this evidence that his name should be removed, the larger cause for which the protesters are fighting suggests otherwise.

The protesters at Princeton, like other student protesters across the nation, are attempting to advance their views through power, not reason.

They are purging their environment of anything that does not conform to their unexamined prejudices.

The modern liberal assault on reason is the intellectual crisis of the modern university.

Instead, a free society is made up of citizens who can govern themselves. Free people require free minds. Fulfilling this task is, or used to be, the job of education.

True education consists of putting all ideas under the microscope of reason—not ridding the world of everything that does not conform with one’s wishes. The latter way lies tyranny, because it makes all others bend to one’s unchecked interests and desires, whatever they may be.

Education rightly understood consists of examining arguments and attempting to respond to them rather than pretending they don’t exist.

As Thomas Jefferson understood it, the mark of a free people is to tolerate those who disagree with them “where reason is left free to combat it.”

Without studying Wilson’s politics, conservatives wouldn’t have a full grasp on why the government today looks the way it does. Without examples to teach them, they wouldn’t understand as clearly that scientific and moral progress do not always go hand in hand.

Furthermore, there is no limiting principle to this liberal deconstruction. Under examination, which heroes of the past would pass the student-led inquisition?

And even if new heroes are installed today to replace the ones of old, the new heroes wouldn’t last long. They would quickly violate a yet undiscovered piety and be summarily thrown into the dustbin of history.

But heroes are venerated not because they are perfect human beings. Instead, we honor them when they act in accord with the highest principles of civilization.

When momentary passions and shifting interests govern, life becomes simply an endless series of power struggles with no higher purpose.

While conservatives should argue against Wilson’s progressive politics, they should refrain from entering the particular battlefield at Princeton. They should not sacrifice the principles that they are fighting for to land another shot on their political adversary.