How Much Land Near You Does the Federal Government Control? Use This Map to Find Out 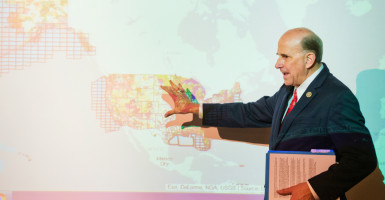 The federal government is looking to use the budget process to expand its ownership of land across the United States despite already owning three of every 10 acres, Rep. Louie Gohmert warned Monday.

Gohmert, R-Texas, said the government’s “massive” control over land has preserved less than 1 percent of endangered species and instead harmed individuals whose livelihoods depend on land ownership.

Gohmert, chairman of the House Natural Resources Committee’s subcommittee on oversight and investigations, made his remarks as part of an event at The Heritage Foundation.

As Congress gears up to decide whether government control should be further expanded, the Natural Resources Committee created an interactive map that illustrates the current scale of federal land ownership and regulation.

Called the Federal Footprint Map, it allows users to sift through the 640 million acres that the U.S. government owns today. Layers pinpoint where federal agencies and bureaucracies control the property.

The map includes a description for each area that details the government’s reasoning for ownership and regulation, such as an endangered species inhabiting the land.

Gohmert said the goal of the project is to make the issue visual so that Americans can evaluate, in a tangible way, the extent of the government’s reach.

“Until you actually see a map where you can lay on layer after layer of what the federal government owns and controls, you really can’t grasp just how bad it’s gotten,” Gohmert said.

The Bureau of Land Management, for example, owns 248 million acres, amounting to more than two and a half times the size of California.

Gohmert said the problem is not only that the U.S. has stripped an excessive amount of land from individual Americans, but has struggled to maintain the land it already owns.

“Right now, we are tens of billions of dollars behind on taking care of the federal land we have,” he said:

Instead of taking that billion dollars a year and working toward making up the massive amount of work that needs to be done to bring federal properties up to appropriate standards where they used to be when they were private or when they were under state control, they’re wanting to buy more land with it.

Gohmert said Americans and the environment would benefit if the government divested itself of some of the land.

“There are those who think the federal government should own all the land … but every time that has ever been tried [it] has failed,” he said. “People take more pride in their property if they have a stake in it.”