Why China Shouldn’t Be Trusted on Its Climate Commitment 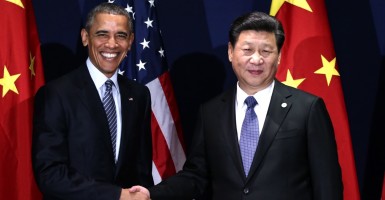 There has been a lot of attention given to China at the climate conference in Paris. As the largest emitter of greenhouse gas emissions in the world, a lot depends on what China will do—or more accurately what it won’t do. Lots of media reports have commended China for its sudden commitment to climate change. But how the media is portraying China’s commitment to combat global warming isn’t based on reality.

Many stories about China and climate change mention China as the top polluter, complete with nasty pictures of factories spewing out black smoke, while also discussing the need to reduce carbon dioxide emissions.

It’s true that China has serious air and water quality problems. But do not associate those problems with carbon dioxide. Carbon dioxide is a colorless, odorless, non-toxic gas. The U.N.’s push to reduce carbon dioxide and other greenhouse gas emissions is predicated solely on carbon dioxide’s alleged impact on the climate, which appears to be much smaller than the climate models are projecting.

Unlike China, America’s power plants are largely clean of the pollutants that we know have adverse health effects.

Be Wary of China’s ‘Commitment’ to Address Global Warming

We should also be wary of any commitment from China because they’ve been grossly underreporting their carbon dioxide emissions and use of coal.

According to a recent story from the New York Times:

China, the world’s leading emitter of greenhouse gases from coal, has been burning up to 17 percent more coal a year than the government previously disclosed, according to newly released data. The finding could complicate the already difficult efforts to limit global warming. Even for a country of China’s size, the scale of the correction is immense. The sharp upward revision in official figures means that China has released much more carbon dioxide—almost a billion more tons a year according to initial calculations—than previously estimated.

China is building more than 350 coal-fired power plants and has plans to build another 800. This is the country we’re going to trust to peak emissions 15 years from now?

The rest of the world should encourage China to address the issue of smog and water contamination. These environmental problems have real adverse human health and environmental impacts. Instead, international bodies are pressing for China to divert resources to address global warming—resources that country could use to truly clean up its environment.

The Problem With International Climate Negotiations

Generally speaking, there are two fundamental issues that have broken down international climate negotiations every year. The developing world’s refusal to curb economic growth to reduce carbon dioxide emissions and the amount of money developing countries want compared to what the developed world is willing to shell out.

Proponents of a negotiation argue that this time is different and that China is making moves to reduce its carbon footprint. China has entered into a climate pact with the U.S. to peak greenhouse gas emissions in 2030 and has set up a pilot cap-and-trade program, and its government continues to pour billions into renewable energy.

If China is not addressing its harmful smog and poor water quality issues, we should be skeptical of its commitment to address global warming. (Again, nor should we be encouraging CO2 reduction. Instead, we should focus on real environmental problems.)

We should also be skeptical of the notion that China will stay true to its word 15 years into the future. Effectively, the agreement the Obama administration made with China is that American households and businesses will suffer from higher energy costs now because of carbon regulations in exchange for China maybe doing something in 2030. Importantly, there has been no discussion of India. If China actually did follow through with its commitment to peak carbon emissions in 2030, India likely will have overtaken China as the most populous country.

The developing world’s use of coal, oil, and natural gas should be celebrated, not condemned. Affordable and reliable energy is an essential input for a better standard of living and economic growth. China’s gross domestic product per capita has increased from a little more than $300 in 1990 to nearly $7,000 today. The increase is impressive, but it’s nowhere near the levels of the GDP per capita of the developed world. The U.S. GDP per capita is more than $53,000.

The focus for China, India, and the rest of the developing world should be promoting economic development and introducing economic freedom. Economically freer countries also enjoy cleaner environments.

Freer economies have access to more products and technologies that make our lives healthier and the environment cleaner. For instance, the availability of simple products like soaps, cleaners, and detergents makes our homes dramatically cleaner and healthier. Freer economies with a sound rule of law protect private property rights. And as a country grows economically, it increases the financial ability of its citizens and businesses to care for the environment and reduce pollutants emitted from industrial growth.

You don’t have to scratch the surface too deeply to understand that China’s about-face on climate change is nothing more than a charade.