The Islamic State’s Genocide of Christians 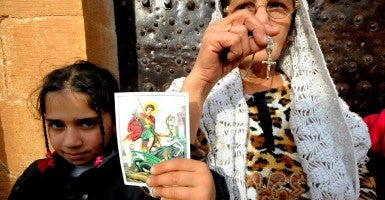 Dozens of Syrian refugees have been living in part of the church grounds in Eski Kale Kuyu, Tukey, some for over two years. The church of Morcercis in the province of Mardin has provided shelter, food, water and eduction to families living on the church grounds. There are several new families who now occupy the church grounds who came from Mosul, Iraq which was overthrown by the Islamic State. (Photo: Gail Orenstein/NurPhoto/Sipa USA/Newscom)

J.J. Daniels is an international human rights attorney who has advocated on behalf of minorities around the world, including from Syria and Iraq.

Reports that the White House will declare that the Islamic State of Iraq and Syria (ISIS) has committed genocide against Iraqi Yazidis, but not against Christians, are of grave concern. Omitting Christians would be a strategic mistake, because ISIS’ spiritual legitimacy depends on their promise to cleanse the “caliphate” of infidel Christians. The U.S. must name Christians in a genocide declaration in order to protect the innocent, to undermine ISIS’ ability to project strength through terror, and to weaken ISIS’ global recruiting efforts.

Genocide has two parts: the perpetrator’s mental state and the acts. According to the legal definition of genocide, the perpetrator(s) must have “special intent” (dolus specialis) to destroy a particular group, in whole or in part, and commit genocidal acts: (1) killing, (2) causing serious bodily or mental harm, (3) inflicting conditions of life to bring about physical destruction, (4) preventing births, and (5) forcibly transferring children.

The mental state of the perpetrator is extremely difficult to prove.

In the only two successful prosecutions for genocide, against Rwanda and Serbia, propaganda was crucial evidence that the perpetrators had special intent to commit genocide. The Rwandan government used radio to great effect by telling Hutu citizens where to find and kill their Tutsi neighbors. The Serbian government used both radio and TV to demonize Bosnian Muslims and Croatians.

Genocidal propaganda demonizes “the other” and morally justifies one’s own cause. This propaganda eventually leads to more acceptance of genocide by both fighters and civilians. United Nations special advisers have already warned that ISIS’ “speeches and media dehumaniz[ing] … Christians and call[ing] for their conversion, or death” are inciting violence through “religious hatred.”

The Caliphate and Genocide of Christians

Abu Bakr al-Baghdadi, the self-proclaimed caliph of ISIS, rose to power based on a promise to eliminate Christians from the caliphate through “holy war” (jihad). In a May 2015 video, Al-Baghdadi stated that “coexistence with Jews and Christians” is impossible according to the Quran and the “explicit statement” of Allah. ISIS’ ability to “cleanse the Caliphate” of infidels is crucial to its moral superiority over al-Qaeda and, therefore, to its recruiting efforts.

In videos of the decapitation of Egyptian and Ethiopian Christians in Libya, ISIS stated that killing them was revenge for the historical grievances of the “Crusades.” In one of the videos, an ISIS spokesman “swear[s] to Allah” and promises the Christian community that “[you] will not have safety, even in your dreams, until you embrace Islam. We will conquer your Rome, break your crosses, and enslave your women. … If we do not …, then our children and grandchildren will … sell your sons … at the slave market.”

ISIS’ theology emphasizes Christians far more than any other group. In the “Last Days,” Muslims, led by their messianic figure (the Mahdi), will vanquish Christians on the battlefield of Dabiq, a word so powerful that it “is the name on the lips of ISIS recruiting sergeants.” Though ISIS kills people of other faiths, it trumpets “attacks on Christians … because these are the enemies they are fighting in the name of Islam.”

To cleanse the caliphate, ISIS has committed genocidal acts in all five categories, including mass killing of men and boys, rape and enslavement of women and girls, kidnapping of children, and the destruction of religious centers and sites (e.g., Jonah’s tomb), according to Dr. Gregory Stanton of Genocide Watch.

In October, ISIS tortured and crucified a 12-year-old Christian boy and publicly raped and beheaded two women in Syria for refusing to convert to Islam. The New York Times described how ISIS labeled the homes of Iraqi Christians with the Arabic letter “nun,” a descriptor for Jesus from Nazareth, and then cut off their water supply to make their homes uninhabitable. ISIS justifies selling Christian and Yazidi girls as sex slaves as an established tenet of Sharia. In one incident, fighters tore a 3-year old Assyrian Christian girl from her mother’s arms to be raised by an ISIS emir. More than 1 million Christians have fled the terror of ISIS in Iraq and Syria, and the remaining populations are a small remnant (250,000 in Iraq and 200,000 in Syria). According to Canon Andrew White, the “Vicar of Baghdad,” Christians face extinction.

Western leaders have called ISIS “un-Islamic.” This characterization endangers Christians if it causes us to ignore ISIS’ own proclamations of genocidal intent. We must understand that when ISIS proclaims “holy war” against Christians and then carries out their mass murders, its members sincerely believe they are fulfilling a spiritual mandate to restore the purity of the caliphate. If we dismiss their statements, then we raise the burden of proof for victims (and prosecutors) to show that ISIS’ leaders had the mental intent to commit genocide.

The White House’s reluctance to name Christians as victims of genocide is reportedly based on a statement by the Holocaust Museum that Christians are allowed to live if they pay a tax for non-Muslims called “jizya.” But both the words of ISIS, including from “Caliph al-Baghdadi,” and the mass murders of Christians are inconsistent with the idea of coexistence.

Members of the International Association of Genocide Scholars and more than 100 members of Congress in House Resolution 75 have called for condemnation of ISIS’ genocide against religious minorities, including Christians. After World War II, Hitler’s genocide of the Jews caused the international community to declare, “Never Again.” But genocides recur when we fail to name them. Years after 1 million Rwandans lost their lives, President William J. Clinton apologized for not naming the genocide. We must prevent ISIS from committing genocide against all vulnerable groups. The added significance of naming Christians is that it will delegitimize ISIS’ spiritual legitimacy and global recruiting efforts. Accurately naming ISIS’ victims of genocide and preventing further harm to them are both principled and pragmatic.