The EPA’s Water Power Grab: Lawmakers Can Use the Appropriations Process to Stop It 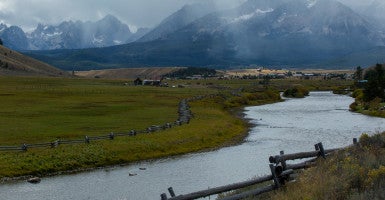 The EPA and Corps finalized a rule that would seek to define what waters they can regulate under the Clean Water Act. The rule is so broad that it could regulate almost any water in the country. (Photo: Steve Smith Blend Images/Newscom)

As Congress figures out what policy riders, provisions in appropriations bills that prohibit or direct the use of funds for certain purposes, will be included in any omnibus appropriations bill, there are several that should make the list, including one to prohibit the Environmental Protection Agency and U.S. Army Corps of Engineers from using funds to implement their water rule in fiscal year 2016.

What the Rule Would Do

The EPA and Corps finalized a rule that would seek to define what waters they can regulate under the Clean Water Act. The rule is so broad that it could regulate almost any water in the country. This includes everything from certain man-made ditches to “streams” that are dry land most of the year, except when there’s been heavy rain.

Under the Clean Water Act, you might be “polluting” even if you just kicked sand into a water covered under the law (a “jurisdictional water”). As more waters are deemed jurisdictional due to this rule, property owners will be forced to secure more permits to engage in ordinary activities, such as farming.

Permits cost a lot of money and take a lot of time to secure. Many property owners may not have either.

Furthermore, the final rule is so vague that property owners may not even know they could be violating the law if they don’t secure a permit. For that matter, many people in the EPA and Corps wouldn’t know someone is violating the law. The rule is so subjective that proper compliance may be determined at the whim of the agencies.

Everyone wants clean water. Not everyone thinks this specific rule giving the EPA and Corps unprecedented power is the best way to have clean water.

It isn’t just farmers, government, and big businesses that will be affected. Sackett v. EPA offers one egregious example of overzealous regulatory enforcement. In this 2012 Supreme Court case, the EPA threatened a couple with fines of $75,000 per day for placing gravel on virtually dry land to build a home in a built out subdivision—without a hearing.

If this wasn’t bad enough, this case was before the final rule was finalized. The rule will almost certainly lead to more Sackett-type abuses because more waters will be deemed jurisdictional, compliance will be even more difficult, and the EPA will be emboldened by having these broad powers codified in regulation.

The EPA would have you believe that opposing its rule means you support dirty water. In a completely inappropriate campaign to gain support for its rule, the agency posed the question “Do You Choose Clean Water?,” trying to equate the rule with support for clean water and, by implication, opposition to the rule as support for dirty water.

Everyone wants clean water. The difference is that not everyone thinks this specific rule giving the EPA and Corps unprecedented power is the best way to have clean water. If prohibited from implementing this flawed rule, the agencies could still withdraw the rule and actually develop a reasonable rule based on sound environmental principles that also respects property rights, individual freedom, and states (not to mention the plain language of the Clean Water Act).

Ideally, Congress itself would define what waters are supposed to be covered and stop letting these agencies continuously grab more power.

The Rule Is Bad for the Environment

It is the policy of the Congress to recognize, preserve, and protect the primary responsibilities and rights of States to prevent, reduce, and eliminate pollution, to plan the development and use (including restoration, preservation, and enhancement) of land and water resources[.]

This rule certainly undermines states’ rights.  From an environmental perspective, it also undermines sound water policy, since those closest to the situation aren’t making the decisions.

States are supposed to take the lead under the Clean Water Act, but instead the federal government is taking over. This is problematic, because states and local governments know their water and natural resources much better than centralized bureaucrats in D.C. States are in the best position to identify solutions to any problems if necessary.

Who Opposes the Rule?

Congress can’t rely on the judiciary to do what Congress should be doing in the first place: blocking implementation of the rule through the appropriations process and passing legislation to withdraw the rule.

The Corps itself was expressing serious concerns in memos to the EPA about the rule shortly before it was released. For example, the Corps completely tore apart two key EPA documents used to support the draft final rule, explaining as late as May 15 (less than two weeks before the final rule was released):

In the Corps’ judgment, the documents contain numerous inappropriate assumptions with no connection to the data provided, misapplied data, analytical deficiencies, and logical inconsistencies.

The Sixth Circuit issued a stay in October blocking implementation of the rule, but this stay could always be lifted; after all, the Court hasn’t even decided whether it has jurisdiction to hear the case.

Congress can’t rely on the judiciary to do what Congress should be doing in the first place: blocking implementation of the rule through the appropriations process and passing legislation to withdraw the rule.

If the Obama administration wants to defend this indefensible rule, that’s on them. Congress, however, can take action that will genuinely protect private property owners, states and local governments, and the environment.