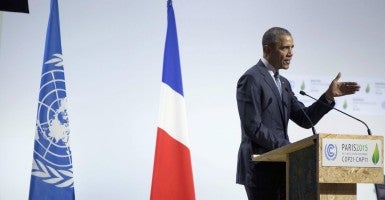 Politicians and bureaucrats from nearly 200 nations are gathered in Paris for an international global warming agreement. In his opening statements, President Barack Obama claimed that “there is such a thing as being too late. And when it comes to climate change, that hour is almost upon us.”

In the midst of such self-induced high-pressure politics and the alleged immediacy of the situation, here are a few numbers to keep in mind.

The U.N.’s stated goal of the Paris conference is “to keep global warming below 2 degrees Celsius” from preindustrial levels. But as the Wall Street Journal reports and others have pointed out well before the Paris talks, many scientists—including those who believe we are facing catastrophic global warming—find the benchmark of 2 degrees Celsius arbitrary.

Professor of climatology at University College London Mark Maslin said, “It emerged from a political agenda, not a scientific analysis. It’s not a sensible, rational target because the models give you a range of possibilities, not a single answer.”

In other words, the entire premise of the conference is faulty.

A major sticking point leading up to and during the Paris climate conference has been a Green Climate Fund that would collect $100 billion per year by 2020 to subsidize green energy and pay for other climate adaptation and mitigation programs in developing nations.

World Bank Group vice president and special envoy for climate change Rachel Kyte said that “the $100 billion was picked out of the air at Copenhagen.”

Executive secretary for the U.N.’s climate change conventions Christiana Figueres has further admitted that the $100 billion is merely a proxy to win the trust of developing countries and that “we are talking here about trillions of dollars that need to flow into the transformation at a global level.”

Even as global carbon dioxide emissions have increased, warming has plateaued. Most scientists would agree that the Earth has experience some warming over the past century, but there is little agreement as to how much is attributable to human activity or if warming is even harmful. An analysis by Judith Curry comparing five data sets of actual global temperatures found that all but one showed that global warming is on a break.

However, climate models have predicted far more warming than has actually happened in the past 18 years. If models have been unable to accurately project climate conditions ten years out, how can even longer-term projections be depended upon to make good policy decisions?

A December report by four climate institutes found that far from decreasing in number, over 2,000 coal power plants are planned around the world in developing and industrialized nations. And for good reason—coal remains an efficient, affordable, and reliable resource to generate electricity.

It’s worth noting, too, that modern American coal power plants aren’t the plants of a century ago (or like the ones in China today) and can filter out 90 percent of mercury emissions and 99.8 percent of soot.

Too many politicians appear out of touch with reality, though. The U.N. Intergovernmental Panel on Climate Change has suggested that “fossil fuel power generation without [carbon capture and sequestration be] phased out almost entirely by 2100” to mitigate warming.

To this end, the Obama administration’s emissions reduction commitment to cut 28 percent of U.S. greenhouse gas emissions by 2025 further stated that this was only a “pathway … to deep, economy-wide emission reductions of 80 percent or more by 2050.”

Models created by the Environmental Protection Agency show that the climate impact of the Clean Power Plan is less than 0.02 degrees Celsius in warming avoided over the next 85 years. Meanwhile, it will be extremely costly to American families and businesses, and particularly so for the poor Midwestern states, which rely more heavily on coal for electricity, and the manufacturing sector, which is on the threshold of renewed growth brought on by the oil and gas revolution.

Obama has maneuvered to avoid Senate ratification of a treaty. But regardless of one’s position on global warming, the Paris climate agreement is shortsighted and a bad deal for Americans and the world’s most vulnerable.