What Conservatives Want to See Included in the $1.1-Trillion Spending Bill 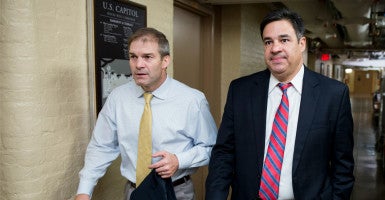 In order for House GOP leadership to earn conservatives’ support on the omnibus spending bill, conservative lawmakers are pushing for several policy riders to be included in the package, with their first priority centered on strengthening the system that allows Syrian refugees to resettle in the United States.

At the monthly Capitol Hill event Conversations with Conservatives, a panel of lawmakers laid out their demands for policy riders—measures that create new policy or limit how government funds can be spent—they want to see attached to the $1.1-trillion omnibus spending bill.

Congress has until Dec. 11 to pass the package, and conservatives warned that a lack of conservative policy riders could prevent them from supporting the spending bill.

“We’re looking to see if there are going to be actual conservative policies in the bill,” Rep. Raúl Labrador, R-Idaho, told reporters Wednesday. “… If those riders on Syria and pro-life issues and other issues like that are not in the bill, it’s just not even worth considering the bill.” Last week, the House passed legislation with a veto-proof majority requiring the secretary of the Department of Homeland Security, the secretary of the FBI, and the director of National Intelligence to certify that each Syrian and Iraqi refugee coming to the U.S. through the refugee program doesn’t pose a security threat.

The bill, called the America SAFE Act of 2015, also temporarily pauses the refugee program until screening procedures for Syrian and Iraqi refugees are implemented.

Speaking to reporters, Labrador stressed that the omnibus spending package should include a policy rider with the America SAFE Act’s language.

“At a minimum, it should have the language that passed last week. What I’m worried about is that our leadership is going to try to weaken even the language from last week,” Labrador said.

Labrador said that he would like to see the spending bill also include language from a proposal floated by Rep. Brian Babin, R-Texas, that would block federal funding to resettle Syrian refugees until the Obama administration strengthens the vetting process.

More than 70 Republicans signed onto a letter sent to House GOP leadership asking them to include the language in the spending bill.

“It’s an important [issue], maybe the most important one, especially as we find ourselves in the context we do and focus on security,” Rep. Jim Jordan, R-Ohio, told reporters Wednesday. “There will be a few folks who hear our position and probably speak out for more at the conference in support of Mr. Babin’s position.”

In addition to addressing Syrian refugees, conservatives on the panel today said they plan to offer a number of pro-life policy riders. Though the lawmakers did not specify on the language of the policy riders, one could strip Planned Parenthood of its federal funding.

“The pro-life issues, protecting Americans, whether the unborn or the rest of our citizenry in terms of protecting ourselves from radical jihadists who are posing as refugees—we must address that,” said Rep. Tim Huelskamp, R-Kans. “That’s a demand of my constituents, I believe constituents all across America.”

Though Republican lawmakers are looking to add conservative policy riders to the omnibus spending package, Jordan said the House Freedom Caucus, made up of around 40 conservatives, would oppose two specific proposals that may be added to the bill.

Jordan, who chairs the Freedom Caucus, said the group would oppose a campaign finance measure floated by Senate Majority Leader Mitch McConnell eliminating caps that govern how much political parties can spend in coordination with candidates.

“We think it’s not the direction we need to go unless you’re going to free up the restrictions on everyone,” the Ohio Republican said.

Jordan also said the Freedom Caucus would oppose any measure that provides additional money to insurers through Obamacare’s risk corridor program—a stance that was echoed by fellow conservative lawmakers.

The risk corridor program, in place until 2017 and called an insurer “bailout” by some Republicans, was created to provide stability in the health insurance market. Through the program, insurers that profit above a specified threshold share a portion of their profit with the government. Those that lose more than a specified threshold receive financial assistance from the government.

“We certainly don’t want to bail out Obamacare and bailing out big insurance companies,” Huelskamp said, referencing the risk corridors. He continued:

If we back down as a Republican majority with the new speaker now, we’re essentially shedding the next 10 months of being able to do anything. … Here’s where we have to take our first stand, or we have an inability to take any more stands while Obama’s still in the White House.