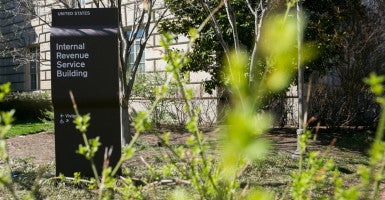 A Tea Party organization is mobilizing its supporters nationwide in an attempt to stymie a proposed regulation from the Internal Revenue Service regarding the disclosures of donor information.

Tea Party Patriots is launching an email and social media campaign—using #IRSPowerGrab—today, encouraging supporters and conservative leaders nationwide to push back against a rule proposed by the Internal Revenue Service that would give nonprofits the option to collect the Social Security numbers of donors who contribute $250 or more to an organization.

“They don’t need to be collecting Social Security numbers. Donations to nonprofits are allowed to be kept confidential,” Jenny Beth Martin, co-founder of Tea Party Patriots, told The Daily Signal. “Having gone through the [IRS] targeting [of conservative groups] because our name is Tea Party Patriots, I’m very sensitive to anything that expands the IRS’ reach into nonprofits and who their donors are.”

The group’s campaign will push the grassroots to post comments opposing the proposed rule to the public record. Tea Party Patriots will also be launching its own page where visitors and supporters can express their opposition to the regulation.

The IRS proposed the rule in September, and the agency will accept comments from the public until Dec. 16.

“We’ve seen that the IRS has successfully targeted organizations, and employees of the IRS have abused the power of the agency against people they perceive as political opponents,” Martin said. “Having more information about who supports those organizations would give them the potential to continue the abuse of power and hurt the individuals, not just the groups. That’s the danger of it.”

Hans von Spakovsky, a senior legal fellow at The Heritage Foundation, joined Martin in opposing the proposed rule. In an interview with The Daily Signal, von Spakovsky cited a lawsuit the National Organization for Marriage filed against the IRS alleging that an official with the tax agency leaked a copy of confidential tax information listing the group’s donors. The IRS paid the National Organization for Marriage $50,000 to settle the suit.

The proposed regulation from the IRS would make it optional for nonprofits to collect the Social Security numbers of donors of more than $250. However, Martin fears that the regulation would eventually become mandatory and affect not just nonprofits with political leanings, but also smaller groups located outside the political arena.

Such increased regulations on those smaller groups, she said, could have negative consequences.

“Small Junior Leagues or civic organizations around the country would also wind up being affected, and not just Tea Party groups, but civic groups have to keep information secure,” Martin said. “It adds to the bookkeeping process and would have a negative effect on organizations that are designed to help make communities better.”

The push for opposition to the IRS’ proposed rule comes as Congress confronts a slew of deadlines. By mid-December, lawmakers are expected to pass a reconciliation bill repealing parts of Obamacare, extend the Highway Trust Fund, and pass a $1.1-trillion omnibus spending package.

Despite the focus on the trio of bills, Martin urged members of the conservative movement to “take a stand and make their voices heard on this important issue.”