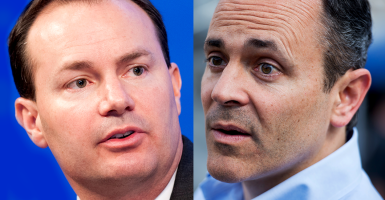 Conservatives have waited more than five years to deliver an Obamacare repeal bill to President Barack Obama’s desk. And until this week, it appeared that Republicans were about to squander what many conservatives believed was their best shot since the law’s passage.

Conservatives say it’s a lesson in staying true to their principles and forcing GOP leadership to live up to campaign promises.

That changed Monday night. In a closed-door meeting with his Republican colleagues, Senate Majority Leader Mitch McConnell scrapped a House-passed bill and conceded to conservative demands to make the repeal package stronger.

Sources on Capitol Hill and in the conservative movement credited the change to two factors: Sen. Mike Lee’s persistence on using the budget reconciliation process and Kentucky Gov.-elect Matt Bevin’s victory last month after campaigning against his state’s Medicaid expansion.

McConnell, who hails from Kentucky, promised to rip apart Obamacare “root and branch” prior to Republicans’ capturing the Senate in 2014. But when GOP leadership stymied an Obamacare repeal vote in July and the House passed a watered down reconciliation bill in October, it appeared that momentum was on the wrong side of the repeal movement. Now, as the Senate advances a bill that cuts far more of Obamacare than the House bill, conservatives say it’s a lesson in staying true to their principles and forcing GOP leadership to live up to campaign promises.

There’s also the home-state factor for McConnell. Bevin, a conservative who ran against the senator in the 2014 Republican primary, made ending Kentucky’s Obamacare exchange and stopping the state’s expansion of Medicaid a top issue in his gubernatorial campaign. He won a decisive victory at the ballot box Nov. 3.

A senior Republican aide familiar with the Senate’s budget reconciliation debate said it was almost certainly a factor in the decision to strengthen the Obamacare repeal bill.

“Matt Bevin ran on a promise to end Kentucky’s Medicaid expansion,” the GOP aide told The Daily Signal on the condition of anonymity. “When Mitch McConnell realized it was politically viable in his home state of Kentucky, he conceded it could be done in the Senate.”

McConnell, who said in July that “we’re certainly going to consider using budget reconciliation for repealing as much of Obamacare as is reconcilable,” will now do that this week, when the Senate is expected to pass a bolder repeal bill. Don Stewart, a spokesman for McConnell, said the majority leader always wanted a broader bill repealing as much of Obamacare as possible under Senate rules. While acknowledging that Lee’s role was helpful, Stewart called The Daily Signal’s characterization of the Kentucky governor’s race “flat wrong.”

“He wasn’t led to this decision. He led the effort,” Stewart told The Daily Signal of McConnell. “He said for months that we should do a broad bill. The House chose a different bill, and it passed overwhelmingly. But that was their bill. Our bill is different.”

Conservatives have long argued that the best way to repeal Obamacare is the same way Democrats passed it in 2010: through the budget reconciliation process with a simple majority of 51 votes in the Senate.

That was conservatives’ goal heading into 2015 with a 54-seat Republican majority and a Republican-led House able to accomplish the feat. Conservatives wanted to show Americans that a Republican-led Congress could undo all of the Affordable Care Act in 2017 with a Republican in the White House. All it would take is a single sentence repealing the law. But it wasn’t that easy. Some Republicans preferred to use reconciliation for other priorities like tax reform. It took a high-stakes showdown in July between GOP leadership and Lee to solidify support for using the reconciliation process to repeal Obamacare.

During that July debate on a highway funding bill, Lee was planning to offer an amendment to repeal Obamacare with 51 votes until leadership forced him to drop the amendment in a move that infuriated conservatives. Lee’s plan would’ve spared Republicans the need to even use reconciliation, but instead he was excoriated by leadership in a private meeting of senators.

But the Utah Republican was still able to use the situation as leverage to secure McConnell’s commitment to repeal Obamacare through reconciliation.

The two senators issued a joint statement July 28. “We will continue our effort to use reconciliation,” McConnell said, “to fulfill the promise we made to our constituents.”

But months later, when the House began drafting its reconciliation language, significant parts of the Affordable Care Act were left in place. The House bill repealed four provisions: the individual and employer mandates, the Cadillac tax on health plans, and the medical device tax. It also cut a sizable portion of federal funding for Planned Parenthood for one year. House Republicans cited Senate rules as an impediment to doing more, but Lee didn’t buy it. He teamed with Sens. Ted Cruz, R-Texas, and Marco Rubio, R-Fla., to denounce the House bill on Oct. 22, a day before the House voted on it.

“Each of us campaigned on a promise to fully repeal Obamacare and a reconciliation bill is the best way to send such legislation to President Obama’s desk,” the senators wrote in a statement. “If this bill cannot be amended so that it fully repeals Obamacare pursuant to Senate rules, we cannot support this bill.”

At the time, the opposition of Lee, Cruz, and Rubio appeared to be too little, too late. The House passed its reconciliation bill Oct. 23 on a mostly party-line vote of 240-189—with one Democrat supporter and seven GOP defectors, including only a few who said the bill didn’t go far enough.

Conservatives, who had spent more than five years plotting their strategy, feared that the bill set a bad precedent that a future Congress would need to follow.

But in reality, the trio of Lee, Cruz, and Rubio put Senate leadership in a bind. With more liberal Republicans already balking at the language to defund Planned Parenthood, McConnell could afford to lose no more than three senators to get the 51 votes needed. Bevin’s opposition to Obamacare and insistence on ending Kentucky’s Medicaid expansion played a central role in his campaign.

“The fact that we have one out of four people in this state on Medicaid is unsustainable, it’s unaffordable, and we need to create jobs in this state, not more government programs to cover people,” Bevin said while campaigning in February.

Bevin’s triumph at the ballot box, Capitol Hill insiders say, was an eye-opening moment for McConnell.

“It all comes down to Kentucky politics for Mitch McConnell,” a former Senate staffer told The Daily Signal. “When he sees the political winds changing, he’s quick to react.”

And that’s what happened Monday. McConnell outlined a plan that goes much farther than the House’s reconciliation bill. The new bill repeals Obamacare’s premium subsidies and Medicaid expansion, as well as most of the taxes.

In doing so, McConnell appears to have won over the three conservative holdouts: Cruz, Lee, and Rubio.

Without those three conservatives, Republicans likely lacked the 51 votes needed to pass the reconciliation bill and deliver a repeal measure to Obama’s desk.

Until the final vote is cast later this week, anything could happen. But for conservatives who mounted their years-long quest to repeal Obamacare, things are moving in the right direction.

“Senators Cruz, Lee, and Rubio deserve credit for refusing to settle for the House-passed bill, which would have left the main pillars of the law in place,” Heritage Action CEO Michael Needham said. “To be clear, there is more work that needs to be done to make full repeal a reality, but the Senate’s effort provides momentum to help make that a reality in 2017.”

This story was updated to include a quote from McConnell’s spokesman and video of Lee’s floor speech Wednesday.