Why Paris Climate Conference Is a Throwback to 1997 Kyoto Debate 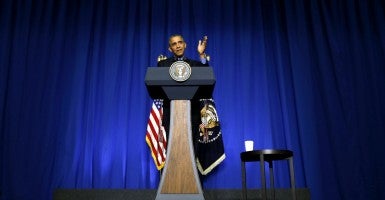 Hey, Paris Climate Conference, 1997 called, and it wants its failed climate discussions back.

Eighteen years ago, the Kyoto climate protocol was debated in Congress, and back then many members questioned the science and the high price Americans would pay for little, if any, benefit from the climate agreement. As leaders from around the world gather in Paris to discuss a new international agreement, many of the concerns raised in 1997 still hold true today.

The 1997 Byrd-Hagel resolution, which passed 95-0, made it clear to the Clinton administration that the U.S. would not sign any treaty that would harm the American economy or exempt developing nations. President Bill Clinton never bothered to send Kyoto to the Senate, as the upper chamber clearly delivered a strong message with Byrd-Hagel.

The Senate’s questions concerning Kyoto mirror what members of Congress should be questioning today. The remarks of former Sen. Chuck Hagel, R-Nebr., during the 1997 debate of Byrd-Hagel demonstrate how little has changed. Here are a select few quotes.

President Barack Obama said that parts of the Paris climate treaty should be legally binding, which would require Senate ratification. Yet the administration has been intent on doing all that it can without a review from the Senate. Much like 1997, members of Congress would reject any treaty sent their way because of the high costs and meaningless climate impact.

Hagel: “Any action this serious that is undertaken by the United States must be based on sound science—sound science and common sense. This proposed treaty is based on neither. If anything has become clear during congressional hearings on this issue, it is that the science is unclear…is that the scientific community has not even come close to definitely concluding we have a problem.”

Hagel, citing testimony from climatologist Patrick Michaels: “Conditions in the real world simply have not matched changes projected by some computer models.”

Though the planet has warmed, as it has in the past, the climate threats simply aren’t there. In fact, satellite data indicates that there has been no significant warming over the past 18 years. Increased trends for extreme weather events do not exist. And the climate models still fail to match up with reality. The shortcomings of the models are quite evident in the warming hiatus the planet is in. More recent climate literature is showing that the equilibrium climate sensitivity (the effect that a doubling of carbon dioxide in the atmosphere would have), is 40 percent lower than what the International Panel on Climate Change projects.

In fact, satellite data indicates that there has been no significant warming over the past 18 years.

Hagel: “But they will not be asking for legally binding commitments from more than 130 developing nations[.] … By the year 2015, China will surpass the United States as the largest emitter of greenhouse gas in the world.”

Actually, China surpassed the U.S. in greenhouse gas emissions in 2007, which goes to show that a lot can happen in 10 years. Despite China’s growing need for carbon-emitting conventional fuels, President Xi Jinping committed to a peak limit on CO2 emissions in 2030. Although China has set up pilot carbon-trading schemes, there is nothing that binds China to keep its word. The U.S. should not blindly implement any carbon-cutting regulation under the assumption those cuts will come.

As with Hagel’s prediction of China in 1997, a lot can happen in 15 years, and policy interests can change rather quickly. Furthermore, China’s lack of intent to tackle true environmental problems should be a red flag.

China has failed, for instance, to require the continual use of scrubbers on coal-fired power plants, causing significant health problems from black carbon soot. If China is not willing to curb industrial productivity to address a real health problem, there is little reason to believe it will do so to address CO2 emissions. With the current pressure from U.N. climate negotiations well in the past by 2030, there would be even less incentive for China to follow through with a non-binding agreement. Simply put, China, India, and much of the rest of the developing world aren’t buying in.

Citing testimony from AFL-CIO, the American Farm Bureau, the National Association of Manufacturers, and many noted economists, Hagel: “They all agree on one very definite thing. The draft U.N. treaty now under consideration would have a devastating effect on American consumers, workers, farmers, and businesses.”

Although many big businesses support the Obama administration’s efforts in Paris, this doesn’t mean an international agreement will be costless. Restricting the use of coal, oil, and natural gas will raise energy prices, and businesses will pass higher costs to consumers. The bottom line is that everything we pay for, whether it’s made here or abroad, will cost more. If decarbonizing the world’s energy economy were cost-effective, businesses and households would be making that transition. But the blunt reality is that the reason more than 80 percent of the world derives its energy from carbon-emitting conventional fuels is that they’re affordable and reliable. Restricting their use by driving up the price through taxes and regulation will be very costly.

Much like 1997, the 2015 Paris climate talks run into the same problems and face the same realities. The planet isn’t cooking, the developing countries will refuse to play ball, and the rest of us will pay for it.