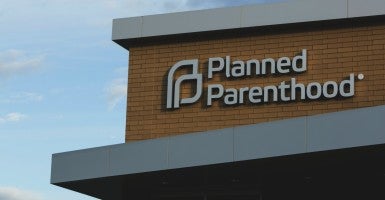 A logo sign outside of a Planned Parenthood clinic. (Photo: Kris Tripplaar/Sipa USA/Newscom)

In the wake of a violent tragedy, Planned Parenthood has redoubled its efforts to silence its critics. The Colorado Springs shooter, who waged the terrible attack, appears to have no connection to society at large, much less to the pro-life movement.

But Planned Parenthood is using him as a tool in its new censorship campaign, which can be summed up in two increasingly familiar words: “Shut up.” Planned Parenthood wants Americans to remain silent about what it does to hundreds of babies every day.

Censorship has had a revival recently in campus protests, which were causing a backlash in defense of sincere debate. Yet squelching public debate is a longstanding tradition of the abortion lobby.

Likewise, reporter Jessica Valenti, to whom Planned Parenthood gave its 2014 “Maggie Award,” brands pro-life speech as “dehumanizing” and praises a federal judge for trying to block it.

What specifically does Planned Parenthood not want you to hear? Words that describe what abortion actually is and what it does to both the mother and the child.

And yes, that Planned Parenthood sells baby body parts. The abortion giant now admits it took money for the parts but claims it was mere “reimbursement.”

Pro-lifers answered that it had no marginal cost to reimburse, and all sales “cover costs” anyway. In response, Planned Parenthood never publicly itemized its alleged costs—it just screamed “lies.” Now it demands silence.

To thinking people, statements about abortion are part of a “debate.” Whether cash for brains is a sale, whether abortion kills a person, and whether baby organ harvesting is barbaric are the things being debated.

Milder rhetoric will not satisfy abortion profiteers. When Pope Francis announced that the Church will newly emphasize what it and the pro-life movement have been doing for years—extending God’s forgiveness to women who have had abortions—the pro-abortion media attacked him for characterizing abortion as sin at all.

The pope also speaks frankly on abortion. This renowned man of peace says “babies” are “condemned unjustly” by the “abominable crime” of abortion and urges Christians to “express the strongest possible opposition” to it.

Pope John Paul II (whom Pope Francis officially acknowledged as a saint) wrote the Catholic Church’s magnum opus on pro-life issues, where he declared that abortion is “murder” and insisted we “call things by their proper name,” all the while condemning violence.

Dr. Martin Luther King Jr. explained that nonviolent truth-tellers cannot be blamed for violence; they “merely bring to the surface” hidden injustice, which “must be exposed … to the light of human conscience and the air of national opinion before it can be cured.”

“Our lives begin to end,” King said, “the day we become silent about things that matter.”