Senate Plan to Repeal Obamacare Could Include Major Concession to Conservatives 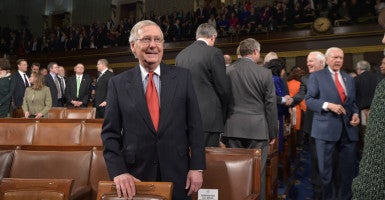 Senate Majority Leader Mitch McConnell, R-Ky., and other members of leadership have a plan to repeal Obamacare that would phase out the expansion of Medicaid. (Photo: Mandel Ngan/CNP/AdMedia/Newscom)

In a bid to win over conservatives, Senate Republicans intend to introduce an aggressive plan to repeal Obamacare that includes phasing out the expansion of Medicaid for low-income recipients.

Last month, the House sent a fast-track reconciliation bill to the Senate that repeals parts of Obamacare, formally known as the Affordable Care Act, and defunds Planned Parenthood.

But three prominent conservatives—Sens. Ted Cruz of Texas, Marco Rubio of Florida, and Mike Lee of Utah—said they won’t support the House’s Obamacare repeal bill unless it goes farther to eliminate more provisions of the law, including Medicaid expansion.

The reconciliation process requires a 51-vote simple majority to be approved, allowing Republicans to avoid a Democratic filibuster. So dissenting votes from four or more of the 54 Senate Republicans would be enough to derail the plan.

“What we are hearing is good,” an aide to a conservative senator said in an interview with The Daily Signal. “It sounds like a big step in the right direction. If everything is as good as they say, we will support it. The devil will be in the details over the next few days.”

Under Obamacare, adults who earn less than 138 percent of the federal poverty line—roughly $16,000—may enroll in Medicaid through its expansion.

So far, 30 states and the District of Columbia have opted to expand Medicaid.

Senate Republicans are meeting Monday night to get feedback on leadership’s Obamacare repeal plan. The chamber likely will vote on the bill this week.

Because the legislation would change the House-passed bill, that chamber would have to hold another vote before an Obamacare repeal gets to President Obama’s desk. Obama has said he would veto the proposal.