Removing Dealership Monopolies Could Save You $1,950 on a New Car 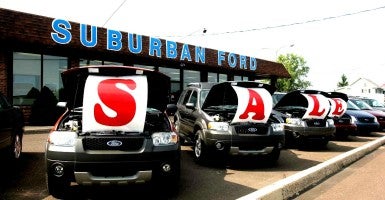 Get ready for it! Holiday deals are about to be in full swing as automakers and car dealerships begin to advertise “unbeatable” end-of-the-year deals and “amazing” savings opportunities.

Want to hear a better deal? Removing the car dealerships’ monopoly on vehicle sales could save Americans $1,950 on a new car.

If you want to buy a new bicycle, you can go to a local bike store or a big-box retailer, or even order one online. If you want to buy a new car, you have to go through a dealership that has been approved by the state. The dealers behave like monopolies, using their government privilege to raise prices and hurt both consumers and manufacturers.

Not only do new dealerships require state approval, but direct sales from manufacturers to consumers are prohibited. The result is wasteful.