Obama Apologizing to the World for US on Climate Is Ridiculous 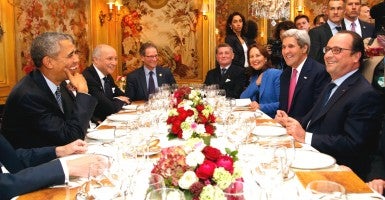 President Obama’s opening remarks at the Paris climate agreement were effectively an apology for industrial progress. At the kickoff of the talks, Obama remarked, “I’ve come here personally, as the leader of the world’s largest economy and the second-largest emitter, to say that the United States of America not only recognizes our role in creating this problem; we embrace our responsibility to do something about it.”

Obama should not be apologizing for the economic growth that dramatically improved Americans’ and much of the world’s quality of life. Instead, the president should apologize for pushing costly and ineffective climate policies that will make us worse off and trap the world’s poorest citizens in poverty.

The Cost of Climate Policies

The real problem facing American households and businesses is the Obama administration’s climate policies. The administration has finalized a slew of regulations to reduce domestic greenhouse gas emissions. Through a set of regulations known as the Clean Power Plan, the Environmental Protection Agency has required states to meet carbon dioxide emissions reduction goals for existing power plants.

At the same time, the EPA finalized a regulation capping emissions of carbon dioxide from new power plants so low as to effectively prevent any coal power plant from running without carbon capture and sequestration technology (which has yet to be proven feasible). The federal government also implemented climate regulations on vehicles, light and heavy-duty trucks, and fracking.

Heritage analysts modeled the cumulative costs of the Obama administration’s climate agenda by modeling the economic costs of a carbon tax. Taxing carbon dioxide energy incentivizes businesses and consumers to change production processes, technologies, and behavior in a manner comparable to the administration’s regulatory scheme—though neither regulations nor a tax is good policy. By 2030, Heritage economists estimate the damage would be:

The trade-off that Americans receive for higher electricity rates, unemployment, and lower levels of prosperity is not an appealing one. Even though electricity generation accounts for the single largest source of carbon dioxide emissions in the United States, the estimated reduction is minuscule compared to global greenhouse gas emissions. Therefore, even if you do believe that the Earth is heading to catastrophic warming, the warming mitigated by the president’s plan would be barely measurable—unlike the economic consequences.

Is Climate Change a Problem?

This “problem” of climate change is hardly one at all. Natural variations have altered the climate much more than man has. Proponents of global action on climate change will argue that 97 percent of the climatologists agree on climate change. There is significant agreement among climatologists, even those labeled as skeptics, that the Earth has warmed moderately over the past 60 years and that some portion of that warming may be attributed to anthropogenic carbon dioxide emissions. However, there is no consensus that temperatures are increasing at an accelerating rate.

In fact, the available climate data simply do not indicate that the Earth is heading toward catastrophic warming or more frequent and severe natural disasters. Quite the opposite. The earth has experienced a pause in warming since 1998, and data shows that the climate is less sensitive to increases in carbon dioxide and other greenhouse gas emissions than the climate models predicted.

… there exists exceedingly little scientific support for claims found in the media and political debate that hurricanes, tornadoes, floods and drought have increased in frequency or intensity on climate timescales either in the United States or globally.

In his remarks, Obama stressed that “[n]o nation—large or small, wealthy or poor—is immune.” Such a sentiment also holds true for climate policies. Policies that restrict the use of conventional fuels will make everyone poorer. And it’s the poorest who will suffer most.

Let’s place blame on the policies and regulations that obstruct citizens around the world from obtaining a better standard of living.