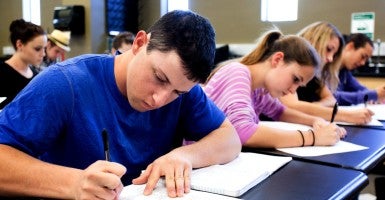 Monday morning, Congress released a proposed reauthorization of the Elementary and Secondary Education Act, currently known as No Child Left Behind.

The proposal, known as the Every Student Succeeds Act, would makes some important changes to No Child Left Behind, such as eliminating Adequate Yearly Progress mandates (standardized testing benchmarks), but would not accomplish conservative policy priorities of:

The proposal also creates several major new programs and initiatives, maintaining a “program for every problem” structure. As such, the proposal would likely maintain significant federal intervention in local school policy for years to come.

New STEM program. The Every Student Succeeds Act would also include a new STEM (science, technology, engineering, and mathematics) Master Teacher program. The STEM Master Teacher Corps program had been introduced as a stand-alone bill by Sen. Al Franken, D-Minn., in February in an effort to create a network of STEM leaders who would be eligible to receive additional compensation funded through the federal program.

The funding would be made available to states to help coordinate existing government preschool programs, such as those operated by the states and Head Start, and to establish new preschool programs. Although some funding has been appropriated for the preschool program for the past two years, the new Every Student Succeeds Act would codify the new $250-million federal preschool program, creating mission creep in the Elementary and Secondary Education Act.

Additionally, this move would continue the trend of growth in federal programs affecting the youngest Americans at a time when there is more empirical evidence than ever on the shortcomings of government preschool programs.

New civics program. The Every Student Succeeds Act would also establish a new program known as Presidential Academies for the Teaching of American History and Civics, which would provide professional development to improve the teaching of history and civics to between 50 and 300 teachers annually, selected from public and private elementary and secondary schools throughout the country. It would also establish Congressional Academies, a similar initiative geared toward high school juniors and seniors at the recommendation of their principal. All participants in both programs receive a stipend for travel expenses.

The Every Student Succeeds Act would end the Adequate Yearly Progress (AYP) mandates under No Child Left Behind, which require that all students in all states make “adequate” annual progress toward universal proficiency in math and reading or have the state risk federal sanctions.

Yet the Every Student Succeeds Act retains the annual testing requirement that students be tested every year in grades three through eight and again in high school. States promulgate their own tests to assess students in advance of the federally mandated state tests, resulting in students in large districts taking an average of 112 mandated standardized tests by the time they graduate.

The proposal would keep the annual testing structure in place. Regardless of the relative merits of standardized testing, federally mandated annual testing would continue to have a real effect on local school policy.

The Every Student Succeeds Act would also include requirements for the new “state-based” accountability plans. Although less prescriptive than the Adequate Yearly Progress mandates, the proposal is specific about the types and the proportion of accountability options that must be included. Approximately 51 percent of a state’s accountability would be required to be based on quantitative measures such as graduation rates and performance on state tests, and the other 49 percent would be based on other more subjective measures, such as school climate and educator engagement.

Overall, the proposal would retain a labyrinth of federal programs, and high levels of federal spending, continuing a trend that has maintained federal intervention in local school policy while failing to improve educational outcomes for children.