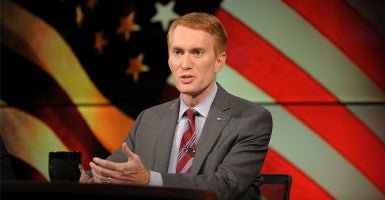 The federal government has “dropped the ball” by failing to curb wasteful spending of taxpayer dollars, Sen. James Lankford says. In a new report, he cites 100 examples.

“With a massive $19 trillion federal debt and a half-a-trillion-dollar deficit, we must tackle our federal budget and root out inefficiencies, duplication and wasteful spending wherever they exist,” Lankford, R-Okla., said in a prepared statement.

In what he cast as an effort to push the government toward being more fiscally responsible with taxpayers’ money, Lankford released a report Monday that outlines “federal fumbles” and lists “100 ways the government dropped the ball.”

In the new “wastebook,” Lankford provides examples of wasteful government spending habits and unnecessary regulations, along with solutions for each problem.

In total, the report pinpoints $105 billion in what it considers wasteful federal spending and “about $800 billion in regulatory impact to the economy.”

I present this report as a demonstration of ways we can cut back on wasteful federal spending and burdensome regulations to help families, small businesses, and our economy begin to get out from under the weight of federal stagnation.

The Cabinet-level departments mentioned the most are State, Agriculture, and Defense. Among smaller agencies, the most mentioned include the IRS, the National Science Foundation, the U.S. Agency for International Development, the Environmental Protection Agency, and the National Park Service.