These 12 Policy Reforms Could Save An Average Household $4,440 a Year 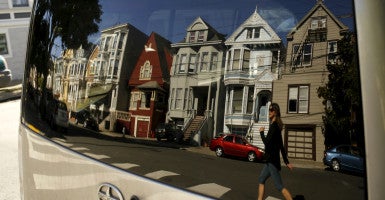 Regulations are affecting how much many Americans pay in rent. (Photo: Jonathan Ernst/Reuters/Newscom)

Economic freedom is a matter of principle, but it’s also a boon to family budgets.

Just 12 economic policy reforms would save the average household $4,440 a year. Opening up markets to more competition, treating outsiders and insiders equally, and squeezing out bureaucratic delays could push prices down enough to give American families some budgetary breathing room.

>>> Read the full report: How Bad Policies Raise the Cost of Living

Nor do Americans need to wait for Washington: States and municipalities can implement some of the biggest cost-saving reforms.

Dozens of studies have looked at specific ways that prices are driven up by policy mistakes. I collected the evidence on 12 policy mistakes and found that the combined effect of free-market reforms would be a huge benefit to consumers: $546 billion a year, more than all the rent paid by Americans in a year. The 12 policy mistakes—and paths to reform—are detailed below. The characteristic vice of local government is to protect the status quo when it ought to embrace the organic changes that consumers seek.

The most costly policy mistake of all, overregulation of land use, is a local issue. Americans once had the right to build what the market wanted, and the result was soaring skyscrapers, elegant mansions, affordable homes near jobs, welcoming town squares, and secret mountain retreats.

Zoning laws, nosy neighbors, parking minimums, height restrictions, and minimum lot sizes have been choking out the organic growth of cities and suburbs across the country. I found that if the typical coastal city adopted milder land use restrictions, rent would fall 10 percent, and home prices would fall 20 percent. (Incidentally, that does not necessarily mean that current homeowners would lose money: lower regulation has been found to increase the price of land and decrease the price of buildings.) In all, adopting mild land use restrictions could save Americans $209 billion per year, with the benefits concentrated among those who currently pay the most for housing.

The characteristic vice of state governments is to write laws so that workers and businesses have to ask permission.

Occupational licensure is particularly harmful, costing the average household $1,033 per year. Workers in professions as disconnected from public safety as teaching school or applying cosmetics now have to be licensed by the state for no good reason. One proposal to reform occupational licensure is Lincoln Labs’ “Right to Work 2.0,” which would force regulators to defend labor regulations on their merits.

Auto dealership monopolies are established by law in every state. Anyone with a storefront can sell bicycles, but if you want to sell cars, you have to get permission from the state government. That also means that manufacturers can’t sell directly to consumers online.

Repealing the crude oil export restriction would also lower the price of gas by 12 cents per gallon.

In Brazil, General Motors tried an online sales model, and the result was a 6-percent drop in prices. Scholars estimate that U.S. consumers would get a similar benefit, which works out to $1,950 in savings on a new car. Most people don’t buy a car every year, so the savings works out to $288 per household per year.

Renewable energy mandates have been established by many states, benefiting favored energy industries, harming others, and raising the price of electricity. If states repealed their mandates—and let all types of energy compete on an even playing field—consumers would soon save $108 per household nationally. In the states that have the most restrictive mandates, there would be even larger benefits.

Medical tort reform, such as limiting the size of payouts in medical malpractice cases, could make health care significantly cheaper. Washington is doing plenty to raise the cost of care, but states can lower health care costs by $82 per household with tort reforms.

The characteristic vice of the federal government is cronyism. Lots of well-connected insiders have figured out that if you take a few dollars from everyone in America, you will be very rich, and the victims might not notice. Below are just a few of Washington’s reverse Robin Hood schemes.

Corporate Average Fuel Efficiency (CAFE) standards are the way that Rube Goldberg would have regulated fuel efficiency. When the Obama administration rewrote the CAFE standards in 2009, engineers and economists predicted that consumers would lose at least $3,800 per new car. Six years later, the price of cars is $4,500 above its previous trend. Repealing the CAFE standards would save the average household $448 per year.

The ethanol mandate requires that refiners use corn for gasoline. Corn isn’t very good at being gasoline. Just letting corn be itself would lower the price of gas by 19 cents per gallon and lower food prices by about one percent, for an annual household savings of $255.

Corporate tax complexity forces corporations large and small to employ armies of accountants and lawyers just to comply with the tax code (and to seek out its many loopholes). Commonsense corporate tax reform would lower their costs. Even if only half the gains were passed on to consumers, the average household could save $230 per year.

Repealing the crude oil export restriction would also lower the price of gas by 12 cents per gallon. That’s just a minor side benefit of repeal, which would also create jobs and increase incomes as well. But the average household will welcome an extra $227 per year.

The Sugar Program and Federal Milk Marketing Orders transfer money from consumers to wealthy landowners by raising the prices of staple foods. A gallon of milk would be 49 cents cheaper with a competitive milk market, and a pound of sugar would be 28 cents cheaper. Consumers would save 16 cents a pound on butter and four cents on a box of breakfast cereal. Each reform would save the average household $29 per year.

Cement production regulation is just one example of the many ways that the Environmental Protection Agency imposes high costs on consumers. Regulation has made it much more expensive to build a cement factory, allowing the existing plants to behave like monopolies. They pass on the costs of regulation to consumers and then some. Going back to the 1990 level of regulation in the cement industry would save the average household $14 a year. The broader lesson is that environmental regulations should be subjected to rigorous cost-benefit analysis.

Twelve steps toward economic freedom and away from cronyism and overregulation would save the average American household $4,440. Congress can make a difference, but so can state capitols and town halls around the country.

There are benefits to economic freedom that are not discussed in this op-ed: more jobs, higher wages, and less volatility in the housing market, for instance. More deeply, economic freedom is a civic virtue in itself—lower prices and greater prosperity are the fruit of individual liberty, not its justification.