Here’s Why This Legal Society Is Examining How Congress Works 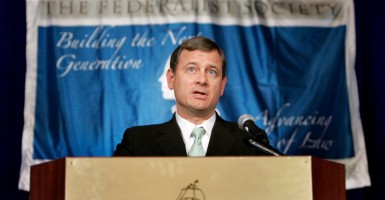 The Federalist Society has catapulted traditional jurisprudence into prominence, making constitutional principles vogue at both law schools and the U.S. Supreme Court. Now, for the first time, the society plans to make a similar play on Congress.

At its annual convention in Washington last week, the legal society announced the “Article I Project,” a pro bono effort to analyze the health of the U.S. Senate and House of Representatives.

Traditionally, the influential legal group has focused on issues concerning the executive and judicial branches. But in recent years, Federalist Society President Eugene Meyer says, the legislative branch has not received “the kind of steady stream of attention it deserves.”

“We hope to change that dynamic through this project,” Meyer said in an interview with The Daily Signal.

Prominent and influential in legal circles, the Federalist Society has achieved significant success at the judicial level since its founding in 1981. In the past three decades, the group has spearheaded the effort to advance an original or textual interpretation of the Constitution.

Meyer said the Article I Project—which takes its name from the section of the U.S. Constitution granting legislative power—will examine the evolving challenges facing a modern Congress in light of permanent principle.

Rather than tailor-made policies, the Article I project aims at producing a guiding philosophy for lawmakers.

Meyer said a “philosophical perspective” on the proper role of Congress has been lacking in recent discussions among academics and policy makers.

“And that’s what we are really hoping to contribute, and think we have a good chance to do,” he told The Daily Signal.

Already, the Federalist Society has recruited leading legal experts for the project, Meyer said. Over the next year, they will study and analyze Congress before offering their findings to lawmakers.

Meyer declined to speculate on where he thinks Congress could improve. Another society member, Sen. Mike Lee, R-Utah, was not as reserved.

During a keynote address at the organization’s national conference, Lee chastised Congress “for investing in its own irrelevance” by surrendering lawmaking authority to administrative agencies.

Lee also praised the Federalist Society for taking “an increasing role in shaping how the Constitution operates [and] how it’s followed within the United States Congress.”

Azerrad, director of the think tank’s Simon Center for Principles and Politics, credits the Federalist Society with being “one of the great conservative success stories of the latter half of the 20th century.” He described its examination of Congress as “a welcome effort.”

Since beginning as a student group at Yale Law School, the Federalist Society has grown into a national network of scholars, students, lawyers and judges. Three of its members currently sit on the Supreme Court: Samuel Alito, Antonin Scalia and Clarence Thomas.

Extending that influence to lawmakers on Capitol Hill will be difficult but achievable, said Randy Barnett, director of the Georgetown Center for the Constitution.

Barnett, who represented the National Federation of Independent Business in its landmark challenge of Obamacare in 2012, said he believes the society can convince Congress to change.

“This is where the Federalist Society comes in,” Barnett told The Daily Signal. “Generally ideology can trump narrow parochial interest when they are salient, when they are well publicized enough. That’s how we got the Constitution in the first place.”

Although the society has yet to reach out formally to congressional leadership, Meyer said he’s certain lawmakers are aware of the project.

Before he got the job, House Speaker Paul Ryan’s chief of staff, David Hoppe, was scheduled to speak at the Federalist Society’s recent annual convention. Hoppe canceled after Ryan tapped him, Meyer said.

Meyer cautioned that the Article I Project shouldn’t be construed as a shift away from the legal group’s traditional emphasis on judicial matters.

The society’s president dismissed rumors that conservative Supreme Court justices wouldn’t attend the group’s convention this month. Although Scalia and Alito did not speak at the event, they attended a banquet afterward, Meyer said.

Some news outlets reported earlier in October that justices were skipping this month’s convention to avoid any appearance of encroaching on another branch of government. Since 2010, the event has featured addresses each year by either Alito or Thomas.