For This Hotel, Catering to Cops, Firefighters Is a Thanksgiving Tradition 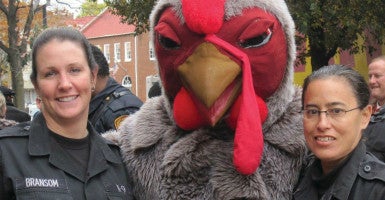 Kim Bransom, left, a K-9 officer with the U.S. Park Police, joins a colleague and a feathered companion for "Thanksgiving on the Mayflower." (Photo courtesy Four Seasons Hotel)

Police officers, firefighters, and emergency medical workers in the nation’s capital will briefly abandon their posts Thanksgiving Day and head to one of the region’s most luxurious hotels.

But don’t worry—these and other first responders won’t be away long. The Four Seasons hotel, in the upscale Georgetown neighborhood, will for the 16th year host the public servants for a free feast dubbed “Thanksgiving on the Mayflower.”

Between 11 a.m. and 2 p.m., the Four Seasons will offer sit-down and to-go meals prepared by Executive Chef Douglas Anderson to all first responders scheduled to work on the holiday.

“It is nice to be able to cater to those that can’t be with their families because they are working, working for all of us,” Four Seasons General Manager David Bernand told The Daily Signal in an interview.

The hotel invited the first responders to visit a 53-foot truck provided by the Mayflower moving company, parked in front of the hotel on Pennsylvania Avenue Northwest. They may sit and dine in the vehicle or take their meals to go.

“We have so many people in the community that cannot get to enjoy Thanksgiving because they’re working,” Bernand said. “And we ourselves, being in the hospitality industry … most of the time, on holidays, are actually working.”

Inside the moving truck, volunteers and hotel employees dressed in festive garb—ranging from Pilgrim costumes to turkey outfits—expect to hand out roughly 350 Thanksgiving meals to dine-in guests as well as 150 to-go meals.

Bernand said some men and women stop by to get meals for co-workers who can’t step away from their desks or other posts.

The hotel’s chefs prepare the meals, Bernand said, “and it’s exactly the same items that we are serving at the hotel brunch.” He added:

It’s usually very festive, and a great atmosphere, and it’s very well appreciated by those who have to work on that day. There is camaraderie and support.

The Washington hotel launched “Thanksgiving on the Mayflower” in 2000. It was the brainchild of  Chris Hunsburger, then general manager and now executive vice president of human resources and administration.

Over the next few weeks, the Four Seasons also will collect jackets, coats, and blankets to distribute to the homeless around Christmas.