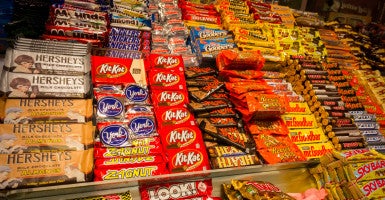 Maine’s Medicaid program spent more than $115 million on obesity-related claims in the past year. (Photo: Richard B. Levine/Newscom)

Some taxpayers consider it a sweet idea: Trim the purchase of soda and candy from the benefits provided to food stamp users.

The state of Maine wants to do just that. To ban food stamp recipients under the federal Supplemental Nutrition Assistance Program (SNAP) from purchasing specific unhealthy items, state officials have to get approval from the U.S. Department of Agriculture.

“We believe that this is a commonsense reform to actually focus on nutrition and healthier choices within the food stamp program,” Mayhew, commissioner of the Health and Human Services Department, said in a phone interview.

The proposal aims to improve health and cut the costs of medical care for low-income, obese Mainers.

It also sticks in line with a key policy goal of Maine Gov. Paul R. LePage, a Republican, a press release says: “that welfare benefits should be spent appropriately and only on essential items, restoring taxpayers’ faith in the integrity of the system.”

How many Maine residents purchase soda and candy with their food stamp benefits? Good question. Mayhew told The Daily Signal that her department is “very frustrated” by the fact that the federal government doesn’t release this data. She said:

We need to have greater transparency in the food stamp program and what items are being purchased. How much Mountain Dew versus milk is being purchased within this program? And yet the federal government has consistently said they do not have that data. The fact remains that they have contracts with all these retailers and could absolutely demand that transactional data.

University of Maine research from 2012 found that the annual medical cost of obesity in the state is $452.7 million, Reuters reported.

“We’ve got to connect the dots between two federal programs: the Medicaid program and the food stamp program,” Mayhew said.

Over the past year, Maine’s Medicaid program spent more than $115 million on obesity-related claims.

“And yet we have this other federal program [SNAP] that is absolutely turning a blind eye to the purchases being made within food stamps for candy, sugary drinks, and certainly on other unhealthy items,” Mayhew said.

According to her agency, over 15 percent of Mainers are on food stamps, and 88 percent of them also are on Medicaid.

Some folks, opposed to the ban on sugary drinks and candy, argue it’s unfair to limit the purchase of certain food items. Others say the proposal is an inefficient way to address a poverty issue, the Portland Press Herald reports.

Michelle Lamm, director of the Maine Hunger Initiative, suggested to Portland’s WCSH6 that another way to achieve a similar goal would be to create incentives for food stamps recipients to purchase healthy food.

“The SNAP benefits are dismal at best. I think they’re $4 a day for all three meals, so there are a limited amount of benefits and families are doing all they can to buy the foods that they need that are healthy,” Lamm told the TV station.

The Daily Signal could not immediately verify the amount Lamm was talking about.

Mayhew said she hopes Maine’s request will be “seriously considered by the federal government” and expects to hear back from the USDA within three months.

“Unfortunately, the track record for the federal government on this issue is not great,” she said.

“What may separate Maine is that this waiver is part of a comprehensive set of reforms that Governor LePage has been pursuing related to our welfare programs, to both restore an employment focus … and to increase the integrity of these programs,” Mayhew said.

“It would be far better if the Congress would act and adopt this prohibition, for the food stamp program, for all states.”

The proposal comes amid welfare reform taking shape in Maine.

“Maine has been a leader in promoting self-sufficiency through work,” Rachel Sheffield, a policy analyst at The Heritage Foundation, told The Daily Signal:

Able-bodied adults without dependents [who are] on food stamps are required to work, prepare for work, or participate in community service. Maine has seen a large decline in the number of [those able-bodied adults] receiving food stamps since they began this work requirement. Other states should follow Maine’s example, and food stamps should be reformed at the federal level to ensure that self-sufficiency for able-bodied adults is the ultimate goal.