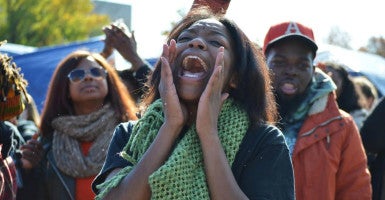 Forty percent of millennials believe the U.S. government should be able to censor speech that is considered offensive to minority groups,  a new poll from Pew Research Center finds.

The Pew poll identified a notable disparity in opinion between millennials—those ages 18 to 34—and those surveyed from three other age groups.

The poll found that 27 percent of Generation X, those ages 35 to 50, favor such government censorship, as did 24 percent of baby boomers, ages 51 to 69.

By comparison, only 12 percent of the so-called Silent Generation, ages 70 to 87, agreed.

“Compared with people we surveyed in dozens of nations, Americans as a whole are less likely to favor the government being able to prevent speech of any kind,” Pew’s Jacob Poushter wrote.

Conflict and protests over the role of free speech in race relations recently has flared at the University of Missouri and on college campuses throughout the U.S. Similar debates over the ideas of gender and privilege versus free speech also have gained the spotlight on campuses.

However, despite the growing popularity of censorship, the poll found that those with less education are more likely to favor it.

Among Americans with a college degree or higher, 22 percent expressed support for the idea of government censorship speech. The number jumps to 29 percent among those with only some college education, and to 31 percent for those with a high school education or less.