Once Again, Obama Wants You to Push Liberal Views During a Holiday Dinner 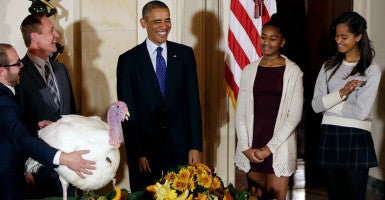 The Obama administration would like to you set aside some quality time with family and friends on Thanksgiving to promote a political opinion.

Explaining how lawmakers should “pass a law that would prevent somebody who’s on the terror watch list from being able to buy a gun,” White House press secretary Josh Earnest decided to encourage folks to use a holiday about gratitude to preach some liberal tenets.

“As people are sitting around the Thanksgiving table,” Earnest said, “talking about these issues, as they should, and as I’m sure they will, all across the country, I hope that’s a question that will be raised, and asked by members around the table—that if we’re going to have a serious discussion in this country about national security, let’s talk about some pretty obvious things that Congress can do.”

Wow, it’s really a shame Earnest is wasting his life as White House press secretary when he clearly could be a top guru on how to establish flourishing, healthy family dynamics.

Nor is this the first time the Obama administration has decided nothing goes better with the holidays than political fights. In 2013, President Barack Obama’s Organizing for Action website had a page, which appears to have been taken down, urging Americans to talk to relatives about Obamacare during the holidays. It suggested that they “integrate the talk into family time: Take advantage of downtime after meals or between holiday activities to start your talk.”

Poll after poll shows that the country is polarized on a variety of issues, and gun control is no exception. According to an October Gallup poll, 55 percent of Americans want stricter laws regarding guns, while 44 percent want the laws to remain the same or be loosened.

There’s no doubt that political dialogue among family and friends can be worth it. I’ve certainly learned from those who don’t share my political views, even if I didn’t change my views ultimately.

But should the White House really be urging that a holiday be the time for political debates? After all, Thanksgiving is traditionally a time to give thanks, not swap statistics and battle over government control.

Isn’t it more fruitful—and better for our nation—if there are times we can set aside politics and focus on what we do have in common, on all the richness of our non-political lives? If we don’t balance the political fights with the non-political conversation, how are we ever going to develop the trust and relationships to make our politically fractured country work?

Not every event, every shared occasion, should involve politics—and it’s telling that the Obama administration seems to think they should. Is the goal here for a government so large, so invasive, so society-pervading that it really is virtually impossible to have a conversation without getting into politics?

At any rate, if you do have a liberal relative who follows the sage wisdom of Earnest and happens to ask you, in between requests to pass the potatoes and turkey, whether you really can sleep at night knowing you’re A-OK with letting terrorists be armed, rest assured that the issue is a tad more complicated than that.

As Jennifer Baker, director of public affairs for the National Rifle Association’s Institute for Legislative Action, pointed out, it’s not as though people on the terror watch list are currently able to just load up on guns without anyone knowing.

“Under the current system,” Baker said, “law enforcement is notified every time a person on the list attempts to purchase a firearm. Law enforcement then makes a case-by-case decision on the appropriate follow-up for each circumstance.”

Nor is it only a few Americans on a terror watch list. According to my former National Review colleague Charles C. W. Cooke, “there are almost one million names on the terror watch list—that’s names, not identities—of which around 280,000 are linked to nothing much at all.” That number comes from the American Civil Liberties Union, which reached the 1 million by projections relying on data from last decade.

Nor, Cooke warns, is it an easy matter to get off the list: “To whom do you apply for removal? Nobody, that’s whom. By design, the system features scant due-process protections and an appeals process straight out of Kafka.”

Sure, analyzing and explaining the intricate details and pros and cons of the terror watch list may not have been top of your list of fun Thanksgiving conversations, but hey, here’s one thing to be grateful for: After this one, there’s only more Thanksgiving that Obama can try to hijack to make it about politics.