Why Massachusetts Gave Up on Common Core 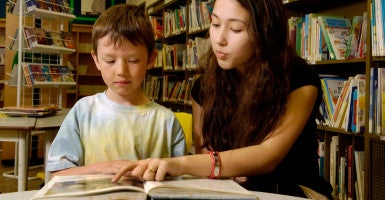 As Common Core faces harsh criticism in light of recent NAEP scores and pushback from policy makers, it is time for more states to consider going the route of Massachusetts. (Photo: Brian Summers/Newscom)

The state Board of Education in Massachusetts has decided to retreat from common core and develop its own state tests—to the dismay of Common Core advocates.

It comes as no surprise that a “top-down, one-size-fits-all” approach to education is not working for the people of Massachusetts.

Interestingly, this policy reversal comes at the recommendation of Mitchell Chester, one of Common Core’s main architects. When a program’s leading advocate admits that it is not working, it is time to give that program a second look.

The sentiment held in Massachusetts is shared by parents, students, teachers, and school administrators all over the country. A recent poll found that approval for common core plummeted to 46 percent among teachers in 2014, a 30-point drop from 2013. Approval among parents indicates a similar pattern, with overall approval rates dropping from 65 percent in 2013 to 53 percent in 2014.

For instance, students in Massachusetts are drastically different from students in Nevada and therefore require a different set of tests and curricula. Therefore, restoring control to states and localities to make informed choices for their communities will better ensure education quality.

While Massachusetts has prided itself on its consistently high standardized test performance, their 2015 NAEP results showed declines in almost every category of testing. Massachusetts’ 8th grade math assessment dropped to its lowest average score since 2005, with 8th grade reading falling to 2009 levels. Massachusetts was not alone in its declining performance.

Since NAEP started its testing in the early 1990s, most states have seen slow but consistent progress. However, this year’s scores took a unexpected dip after almost 20 years of progress.

Russ Whitehurst at The Brookings Institution found a statistically significant link between state adoption of Common Core and lower NAEP scores. While some argue that the decline in test scores may simply be because students and teachers need to adjust to a new system, Whitehurst writes that “the modest correlation suggests that more is going on than disruptions in instruction associated with the rollout of a new assessment system.”

Neal McClusky of the Cato Institute came to a similar conclusion—“that the states that never adopted the Core outperformed the average could indicate that the disruption theory is correct: foregoing the transition to the Core enabled better performance.”

As Common Core faces harsh criticism in light of recent NAEP scores and pushback from policy makers, it is time for more states to consider going the route of Massachusetts and say “no thanks” to Common Core State Standards.

This article has been updated to specify that the State Board of Education in Massachusetts has decided it will develop its own state standards.