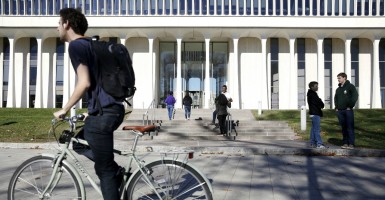 After class, he’d meet with his senior thesis advisor Christopher L. Eisgruber, who Geist said at times, served as more of a “mentor” than an advisor.

In 2005, Geist would go on to graduate from the prestigious Ivy League, while nabbing the renowned Spirit of Princeton Award for his work on sensitive issues including human trafficking, sex trafficking, and genocide.

Eight years later, his mentor, Eisgruber, would go on to become president of Princeton University.

Looking back, Geist told The Daily Signal he never would have imagined that ten years later, the university would be caught in a wave of campus protests, with students calling for the building where he earned his degree to be scrubbed of its name.

But moreover, Geist said, “I didn’t imagine that the president of the university would be in some way deciding to back the protesters.”

The protesters are part of a group called the Black Justice League, which according to its Facebook page, started in the wake of the shooting death of Michael Brown in Ferguson, Mo., and aims to dismantle racism.

Woodrow Wilson, they believe, continues “the legacy of white supremacy and anti-Blackness on campus.”

To voice their concerns, members of the Black Justice League organized a sit-in inside the president’s office. Thirty-two hours later, the sit-in ended with Eisgruber giving into many of the student’s demands.

Among their demands, the Black Justice League asked, “the university administration publicly acknowledge the racist legacy of Woodrow Wilson and how he impacted campus policy and culture.”

We also demand that steps be made to rename Wilson residential college, the Woodrow Wilson School of Public Policy and International Affairs, and any other building named after him. Furthermore, we would like the mural of Wilson to be removed from the Wilcox dining hall. We understand that a name change does not dismantle racism, but also know that the way we lionize legacies set precedents.

The Black Justice League also demanded “cultural competency training for all staff and faculty,” mandatory classes on the “history of marginalized peoples” and a “cultural space on campus dedicated specifically to Black students.”

The full list of demands is laid out on the group’s Change.org petition, available here.

Eisgruber responded on Thursday by making public an official agreement addressing each of the student demands.

Geist felt the agreement was premature, and didn’t consider the many other opinions surrounding the protesters demands.

“To make this huge decision that impacts the degrees of many, many students—myself included—without consulting them or waiting to hear their viewpoint, that to me is very troubling,” Geist said. “Especially when it’s only because of a few students who are very vocal and violated the school rules.”

Geist, who is now a lawyer, isn’t eager to speak critically of his former mentor, but after witnessing Eisgruber express his “personal view” that a mural remembering Wilson in a campus dining hall should be removed, and direct the Board of Trustees to “initiative conversations” surrounding the renaming of the Woodrow Wilson School of Public and International Affairs, he had enough.

For a while, “I sort of stayed away from these race issues,” Geist said. But now, the situation has become “intolerable.”

I think this got to a point where it’s become intolerable…it’s both intolerable and for me, because I care about human rights and civil rights, I think this is very bad for the movement. Unfortunately, we see the civil rights movement hijacked in some way by radicals.

He also called it a “weird double-standard, where they pick and choose what to be offended by and to me, that gives it less credibility.”

Most of them are self-described progressives and progressives have a long history of supporting eugenics, the Democratic party was the party of the South and the KKK and of segregation.

Over the weekend, Geist created a counter protest for alumni of the college to “express our concern at the administration’s approach to the Black Justice League’s demands.”

Thus far, it has only garnered 34 supporters.

Another counter-protest, however, led by current students has gained more than 1,245 signatures. Geist said in part, his effort was meant to show those students that they have the support of the fellow Princeton alum.

“Alumni are a little nervous about putting their name on something because of their careers,” Geist said.

I wanted it to be clear that alumni are supporting undergrads that are trying to stand up against bullying tactics and are trying to really preserve the legacy of Princeton.