Why Congress Must Take Back Authority to Address Burdensome Environmental Regulations 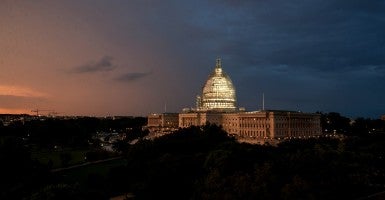 Congress has a chance to reassert itself against regulatory overreach.

Under the CRA, Congress is provided an expedited process to rescind rules through resolutions of disapproval. If enacted into law, a disapproval resolution prohibits the agency from issuing a rule that is in “substantially the same form” as the one that was repealed.

Now that the Senate has passed the three disapproval resolutions, the House is confronted with a critical decision as to whether it will address the Obama Administration’s environmental overreach.

Waters of the United States

The EPA and Army Corp’s rule known as the “waters of the United States”, or WOTUS seeks to regulate almost every type of water in this country. This could mean anything from certain man-made ditches to “streams” that are dry land almost all year – except after heavy rain.

Many property owners will likely have to secure more Clean Water Act (CWA) permits before engaging in even everyday activities, such as farming. The rule is so vague that property owners may not engage in certain activities simply out of fear of unknowingly violating the rule.

Further, under the Clean Water Act, states are supposed to play a leading role in implementation of the law. The EPA and Army Corps of Engineers simply ignore states and concentrate power in Washington.

This arrogance undermines environmental protection itself. States are in a much better position to identify their water quality concerns and identify solutions that best meet their needs.

Not surprisingly, attorneys general and agencies from 31 states are suing the federal government. Counties, farmers, ranchers, home builders, manufacturers, and small businesses are opposed to the rule. This is just a sampling of the wide opposition. The Senate voted 53-44 in favor of the CRA disapproval resolution to rescind the WOTUS rule.

The House has already passed legislation (H.R. 1732) that would repeal the WOTUS rule. That vote was 261-155, with 24 Democrats voting in favor of the resolution. The CRA disapproval resolution (S.J. Res 22) also repeals the rule.

Some may claim that prohibiting any new rule from being in substantially the same form (as the CRA disapproval resolution does) is a major obstacle for the agencies.

That’s absurd. The meaning of “substantially the same form” isn’t clear, but given the wide deference that courts give to agencies, there would likely be significant leeway given to the agencies.

Furthermore, when Congress passes legislation to reject a rule, this is already a clear indication to agencies that any new rule shouldn’t be in substantially the same form (albeit, agencies may ignore the will of Congress).

The Clean Power Plan is one of two EPA greenhouse gas rules. The rule requires states to meet carbon dioxide emissions reduction goals for existing power plants. A second EPA rule caps emissions of carbon dioxide from new power plants so low as to effectively prevent any coal power plant from running without carbon capture and sequestration technology (which has yet to be proven feasible).

Regardless of one’s opinion of global warming, the Clean Power Plan does next to nothing to reduce global temperatures. Models created in part by the EPA itself show that the climate impact of the Clean Power Plan is less than 0.02 degrees Celsius in warming avoided over the next 85 years. Meanwhile it will be extremely costly to American families and businesses, particularly so for the poor, Midwestern states which rely more heavily on coal for electricity, and the manufacturing sector which is on the threshold of renewed growth brought on by the oil and gas revolution.

Further, the Clean Power Plan wreaks havoc on American representative government. The Clean Power Plan violates principles of federalism, inappropriately coerces states, allows the EPA to exceed its statutory authority under the Clean Air Act, and ultimately surrenders important and far-reaching decisions about how Americans access and use energy to unelected bureaucrats

Letting the President Defend the Indefensible

Unsurprisingly, the President has already issued veto threats on each of these disapproval resolutions (S.J. Res 22, S.J. Res 23, and S.J. Res. 24).

In acting upon these disapproval resolutions, Congress would make it clear where the legislative branch stands on these rules. If the president vetoes the resolutions, that’s on him.

He’d be the one defending these indefensible and widely opposed rules. At least Congress would have shown that it can get something meaningful done and has the will to reassert its power against an agency, like the EPA, which long ago decided it would ignore the will of Congress.

This piece has been updated by the authors.