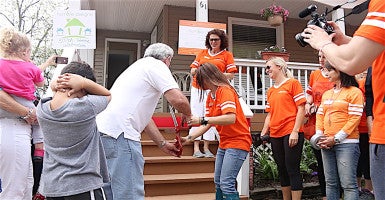 Recovering addict Leann Lecik says her problems all began when she had surgery in the mid-2000s.

The former pharmaceutical representative and national sales consultant was prescribed a pain medication during her recovery, and an ugly addiction soon kicked in.

Lecik says she began abusing the pills, then drinking heavily. The Michigan native eventually was charged with driving under the influence. The court ordered her to attend several rehabilitation programs, where she got clean.

In an interview with The Daily Signal, Lecik says she stayed sober for four years before she relapsed.

She met the man who would become her husband at an Alcoholics Anonymous meeting and, at age 39, became pregnant. After her cesarean section in early 2013, a doctor sent her home with a prescription for the opioid Dilaudid, and she descended into addiction once more.

“I was a stay-at-home mom and started taking pills and drinking and … it got really bad,” she says.

Lecik estimates she had tried nine taxpayer-funded rehabilitation centers and one privately operated program by the time she was 40. In April, she finally agreed to enter a one-year rehab program at Grace Centers of Hope, a homeless shelter that specializes in addiction recovery in Pontiac, Mich.

“When I got here, I was in a custody battle with my husband, we were separated, and I was a mess as a mom,” says Lecik, who has reconciled with her husband.

Earlier this week, Grace Centers of Hope received World magazine’s Hope Award for Effective Compassion, a yearly acknowledgment of privately run organizations doing extraordinary work to help the needy, along with a $25,000 donation.

The Christian news organization credited Grace with “transform[ing] homeless, addicted, and despondent men and women into workers and homeowners.”

The award was presented Thursday at The Heritage Foundation’s 2015 Antipoverty Forum in Washington, D.C.

Kent Clark, pastor and CEO at Grace, says the center—founded in 1942 and formerly known as Pontiac Rescue Mission—has not always been so effective at battling poverty. In its earlier iteration, he suggests, Grace operated like a “flop house with maybe the Ten Commandments inserted somewhere,” basically housing addicts and handing out welfare checks.

“I was on the board for a few years and I soon saw that if all you’re doing is feeding, clothing, and sheltering a drug addict, simply keeping them alive, that’s not biblical charity,” Clark tells The Daily Signal.

Clark, who has worked with Grace Centers for 27 years, began lobbying other board members to adjust the program’s operations. But they didn’t agree until 27 men living at Pontiac Rescue Mission were arrested for operating a car-theft ring out of the shelter’s dorm room in 1989.

Around that time, Clark says, Pontiac’s CEO left, and he was asked to assume the role.

Since then, Clark has launched a yearlong rehabilitation program anchored in Christianity that teaches life skills to men and women. He also has maintained a 30-day emergency care shelter and a two-year aftercare program for graduates. To enter the program, men and women must be both homeless and addicted or victims of domestic abuse.

At any given time, Grace Centers houses up to 159 men and women. It is undergoing a $2.2-million renovation to house 104 more homeless women and children. Last year, Clark says, the program had to turn away 8,500 women and children because of lack of space.

Grace Centers no longer accepts government funds, grounding many of the life skills classes in religious faith (clients are required to attend services at nearby Grace Gospel Fellowship) and operating a $5.7-million budget built mostly on private donations. Although Pontiac itself is poverty-stricken, Clark notes, surrounding Oakland County is quite wealthy.

“People want to see their dollars count, and they want to see people getting their lives back,” Clark says.

In 2012, the publication Crain’s Detroit Business named Grace Centers of Hope the city’s “best-managed nonprofit” for implementing new technology to track bed openings and producing positive outcomes for clients of its homeless shelter.

“It is our very strong belief here that social ills are not solved by cold checks from Washington, or entitlement- and enablement-type policies,” Clark says.

‘Dollars Not the Answer’

Clark operates Grace Centers of Hope with his wife, Pam, a psychologist who runs the group’s program for women and children. The duo oversees 77 full-time and 20 part-time employees.

Grace Centers differentiates itself from most transitional housing or rehab programs in this way: After a year, graduates often are offered employment—up to 80 percent of staff are graduates, Dr. Clark says—and given the opportunity to become homeowners.

Aftercare residents live in nearby single-family homes, paying $350 per month in rent. The residences, located in a low-income part of Pontiac left bankrupt after GM shut down a local plant in 2009, were purchased by or donated to Grace Centers. Qualifying residents may buy homes for $172 a month over 10 years. There is no one more [of a] loner than the drug addict, so it is my belief that family and the local church are the true building blocks of a solid society. We own 45 houses here in a collected neighborhood group and right in the middle of that community is Grace Gospel Fellowship.

Lecik, now seven months into her rehab program, says she plans to purchase a Grace home and live there with her husband and young son after she graduates. She currently works the phones in Grace’s corporate office on days she doesn’t have classes on topics ranging from parenting and nutrition to codependency and the addiction cycle.

“To give us the opportunity to become homeowners, who does that?” Lecik says. “They make you feel like you’re worth fighting this fight, and doing this for. … We’re not just a paycheck to them.”

Dr. Clark guides women through an initial “lockdown” phase when they arrive at Grace and aren’t allowed to travel freely out of the center for two months. She describes the work largely as establishing rules and boundaries, or a new normal, for addicts.

“We know that throwing dollars at the problem isn’t the answer,” Dr. Clark, who has a doctorate in Christian psychology, says. “Clients have got to feel consequences for their behavior, to stop chasing false gods and [ruining] their lives with drugs to feel normal.

“To see these men and women come out of desolation, and be normal, and take care of their own children, is amazing,” she adds.