‘These Are Tyrannical Students’: What a Former Harvard Professor Thinks of College Protests 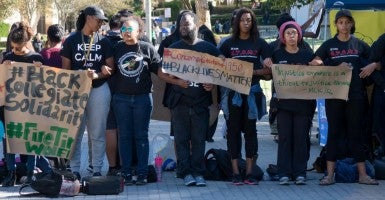 Watching student protests spread like wildfire across college campuses nationwide, a former Harvard Law School professor of 50 years is speaking out, warning that students are “moving to the absurd,” and faculty and administrators are doing nothing to stop it.

“It’s gotten to the point where it is so abused and so hypocritical, and yet nobody is concerned,” Alan Dershowitz told The Daily Signal in a phone interview. “After 50 years of teaching at Harvard, I have never met a less courageous group of people than tenured faculty.”

The last thing administrators or faculty want to do is get into fights with minority students, because then they’re perceived as being racists and sexists and homophobes, and these are epithets that are hard to respond to. So it’s much easier to go with the flow and be popular, particularly with the most vocal students.

Dershowitz, a Jewish native of Brooklyn who’s been called “the nation’s most peripatetic civil liberties lawyer,” speaks to the protests from experience. Throughout his career, Dershowitz says his pro-Israel advocacy work triggered anti-Semitic and hateful protests from students when he would speak on college campuses.

But those protests, he said, you never read about in the news.

“At Johns Hopkins University, when I delivered the Milton Eisenhower lectures, I was defaced with Hitler mustaches painted on my face,” he said.

Dershowitz believes that protests are a legitimate exercise of free speech “as long as the protests don’t call for other people to lose their right of free speech.”

But the recent protests sweeping across college campuses, he said, are anything but.

“It started at Harvard with Larry Summers being fired, and once the faculty and the students saw that they had this kind of power…it’s very hard not to use it, because if you don’t use it, you’re regarded as a sellout.”

And then it moved to University of Missouri, where apparently there were some racial tensions and problems. There may have been good reason for a transition of leadership. That may be correct. But then you move to the absurd, where at Yale they’re spitting at somebody who was talking about free speech. Or where they ban the showing of “The Vagina Monologues” because it doesn’t take into account transgender. Well, let transgenders write their own plays. Everybody should write their own plays. The idea that you can’t have a play about “The Vagina Monologues” because it doesn’t include transgender is just blatantly absurd.

The most recent example took place at Princeton University, where students are protesting to remove President Woodrow Wilson’s name from all school buildings because he supported racial segregation.

Among other demands, Planet Princeton reported that students “called on the school to provide a dedicated space on campus for black students that is clearly marked.”

According to the Associated Press, Princeton University President Chris Eisgruber ended a 32-hour sit-in by signing an agreement with the students to “look into the legacy of alumnus and former U.S. President Woodrow Wilson.”

Dershowitz believes that all incidents of alleged racism and discrimination on college campuses should be investigated, addressed, and used as a “teaching moment” for students. But by giving in to the protesters’ “abused” demands, he said, faculty and administrators are relinquishing their primary duty of ensuring that “the exchange of ideas, the free expression of points of view, is never compromised.”

“It’s time for some brave administrators to stand up to these student hypocrites, and these are tyrannical students who think the truth is on their side and there’s no reason to hear opposing points of view,” Dershowitz said.

But that, he added, would require a “brave administrator or a brave faculty member.”

I wish I were still back teaching actively, because I would be standing up to them.