Maine Doubles Down on Welfare Reform Despite Media Backlash 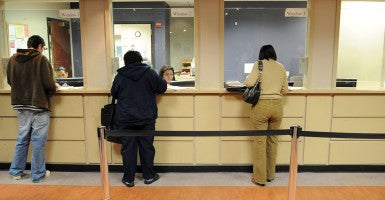 People wait in line to apply for benefits, including Medicaid and Food Stamps, in Georgia. (Photo: Erik Lesser/ZUMA Press/Newscom)

“I can’t stress enough what an attack campaign it has been from the media for four and a half years,” Mayhew said Thursday at an anti-poverty forum in Washington, D.C., hosted by The Heritage Foundation.

Then there are the more personalized critiques: “There is a poet, or he calls himself a poet, and he sends me poems all the time,” she added. “They are not nice poems.”

Mayhew claims that detractors—who mostly take issue with welfare reforms enacted by Gov. Paul LePage, a Republican, since his election in 2011—have gone so far as to call her “Commissioner Evil,” and her and LePage’s policies a “War on the Poor.”

The irony, according to Mayhew, lies in the fact that her and LePage’s efforts actually aim to empower Maine’s poorest citizens. She says a third of the state is on welfare.

“The welfare hurricane doesn’t just destroy one family; it destroys generations of them,” Tarren Bragdon, president and CEO of the Foundation for Government Accountability, said at the event Thursday. “This work is about giving children a better chance for a future.”

To illustrate that point, Mayhew told a story of one of her first days on the job as DHHS commissioner, spent touring a substance abuse treatment facility for adolescents:

I was taken aback by one of the youth who came up to me—it was actually several youth, who were just completely focused on whether I could help them get disability. These were 15-year-old, 16-year-old young men clearly battling addiction, but they had decided that the answer for them was to pursue disability. And, frankly, as we all look at that pathway, that truly is committing individuals to a lifetime of poverty.

Since LePage assumed the governorship, Maine has reduced enrollment in the state’s food stamp program by over 58,000; currently, according to Mayhew, there are 197,000 people on food stamps, down from a high of 255,663 in February 2012.

Mayhew says the decline is due to eliminating the waiver of the work requirement previously attached to food stamps, as also witnessed in Kansas. Under the new legislation, recipients would need to work 20 hours per week, volunteer for about an hour a day, or attend a class to receive food stamps past three months.

LePage and Mayhew have also rolled back Medicaid eligibility through a series of battles Mayhew called “fierce.”

With a population of roughly 1.3 million, Maine had 357,000 individuals receiving Medicaid benefits when LePage took office. Today, 287,000 people are on Medicaid, according to Mayhew.

“What we have done truly has taken the arguments to the public to underscore what has been lost as that program grew out of control, never mind that the resources that had to be devoted to Medicaid were being taken away from education, infrastructure, and reduced tax burden on the state of Maine,” Mayhew said.

In August, Maine DHHS announced they planned to redirect $3.24 million in welfare savings to fund home care services for elderly citizens as well as the Meals on Wheels program.

Lastly, Mayhew touched upon Maine’s efforts to retool the Temporary Assistance for Needy Families (TANF) and Electronic Benefit Transfer (EBT) card programs, stating that Maine had over 15,000 open TANF cases when LePage took office. That number is down to less than 5,000.

LePage’s and Mayhew’s policies, as Mayhew herself highlighted, have not been without controversy.

Earlier this week, amid an ongoing dispute over EBT cards being used to wire money abroad, critics accused the LePage administration of using last Friday’s terror attacks in Paris to justify reforms.

“This proposal is really an example of fear-mongering at its worst,” Robyn Merrill, executive director of Maine Equal Justice Partners, told MPBN News.

But Mayhew does not plan to back down—especially if it means reducing her own influence long-term, and shifting that responsibility to local non-profits.

“I can’t underscore enough that part of the issue is government is too big, my agency is too large, and people are trying to preserve their jobs,” she said.

“We have got to reduce the size and scope of these agencies if we are going to have communities really take on the responsibility of supporting these families and these individuals on those pathways [to independence].”