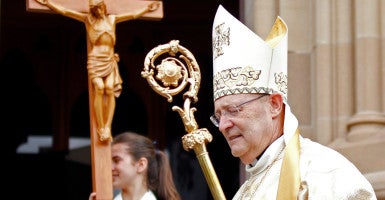 Australian Archbishop Julian Porteous is facing court trials over distributing a booklet advocating marriage as being between a man and a woman. (Photo: Daniel Munoz/Reuters/Newscom) 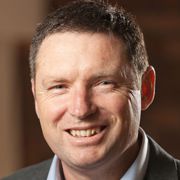 Lyle Shelton is managing director for the Australian Christian Lobby.

Australians have always viewed America’s litigious culture with suspicion. Our “no worries mate” approach to life means we tend not to rush off to court at the drop of a hat.

So last week when a state government commissioner ruled that the nation’s Catholic bishops may have broken the law in distributing their booklet “Don’t Mess with Marriage” eyebrows were raised.

The use of the law to persecute same-sex marriage objectors like florists and wedding cake makers is something that, in the minds of most Australians, happens “only in America.”

Despite opinion polls showing strong support for same-sex marriage, very few in Australia have seriously believed change will affect anyone else.

The bishops’ booklet was distributed nationwide but in Tasmania, the archbishop of Hobart, Julian Porteous, sent it home in a sealed envelope to parents of children enrolled in Catholic schools.

At the time, public debate was running hot on the issue of same-sex marriage and Porteous wanted to provide guidance to his flock on the church’s teaching.

It is an inoffensive booklet, written in the style of a pastoral letter and very respectful of same-sex attracted people.

Incensed, the leader of Australia’s gay marriage political movement, Rodney Croome, said the bishops had turned children into “couriers of prejudice.” He urged people to complain to the Tasmania’s Anti-Discrimination commissioner, Robin Banks.

The Anti-Discrimination commissioner is a state government appointee with a taxpayer-funded office to oversee anti-discrimination legislation, conduct conciliation meetings and recommend cases to go to court.

Commissioner Banks ruled on Friday that not just Porteous, but the entire Australian Catholic Bishops’ Conference, has a case to answer.

They have 21 days to respond and it is highly like the matter will proceed to a court-style tribunal and ultimately on to the Tasmanian Supreme Court.

Failure to comply with a tribunal ruling could lead to hefty fines.

Because this is in effect a test case for anti-discrimination law, the matter could even go all the way to the High Court in Canberra.

That the largest church in Australia is under fire for doing what churches do, is such a shock that it has the potential to turn the whole marriage debate on its head.

Gay activists have spent years telling Australians that legalizing same-sex marriage will not affect anyone else.

Sensing that this untruth may be exposed, liberal media outlets campaigning for same-sex marriage have been largely silent about the case.

In recent years, political activists for the gay lobby have had anti-discrimination laws amended to have sexual identity considered a protected attribute along with the likes of race or gender.

The trigger threshold is low in many of these statutes and in Tasmania, simply causing offense is enough to fall foul of the law.

Alarmed at these developments, the conservative state premier (equivalent of a U.S. governor) Will Hodgeman, announced this week the anti-discrimination law would be reviewed for possible amendment.

Delany claims offense because the bishop’s booklet allegedly implies same-sex attracted people are not “whole” humans and that gay marriage amounted to “messing with kids.”

In examining the context, it is clear Delany is clutching at straws. With regard to “whole” humans the bishops write of man-woman marriage:

Their physical, spiritual, psychological and sexual differences show they are meant for each other, their union makes them whole, and through their union ‘in one flesh’ they together beget children who are ‘flesh of their flesh’.

With regard to “messing with children”, the context not reported in the mainstream media is vital.

But sociological research, as well as the long experience of Church and society, attests to the importance for children of having, as far as possible, both a mother and father.  ‘Messing with marriage’, therefore, is also ‘messing with kids’. It is gravely unjust to them.

These are, of course, two of the most important arguments those seeking to preserve marriage wish to make in the public square.

Australia’s new prime minister, Malcolm Turnbull, who deposed Tony Abbott in a party room coup in September, has vowed to hold the plebiscite after next year’s federal election. This means the timing of the plebiscite is likely to be 2017.

The use of legal persecution to shut down one side of the debate does not auger well for a fair plebiscite campaign.

Australia’s early history as a brutal dumping ground for British convicts has ingrained into the psyche of our people the egalitarian idea of giving everyone a “fair go”.

To this day if Australians get a sniff that someone is not getting a fair go, even if they profoundly disagree with them, they will rally to their cause.

Poking this spirit may well prove to be gay activists’ biggest mistake.