A Conservative Student’s Take On the Recent College Protests 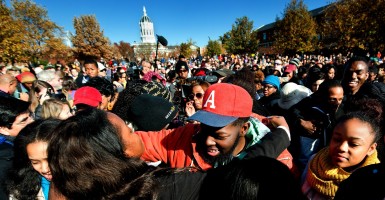 Julius Kairey is a former member of the Young Leaders Program at The Heritage Foundation.

Can liberalism defend itself from its progeny?

This question is rarely considered by liberals themselves. But after seeing the disturbances on America’s campuses over the last couple of weeks, they would be well-advised to start.

Universities are supposed to be bastions of liberalism. Liberal administrators have insisted for decades that they know how to craft an environment free of hatred and bigotry.

Under their beneficent control, America’s campuses would nurture a belief in universal human dignity that undergirds the traditional liberal worldview. Multiculturalism and affirmative action were stepping stones aimed at vindicating the most important value of all: tolerance.

The Definition of Intolerance

Of course, tolerance that proceeds in only one direction – “tolerance for me, but not for thee” – is the very definition of intolerance.

Yet that intolerant conception is now accepted as correct by some leftist students nationwide.

The results have been predictably disastrous.

The left has perverted the liberal idea of tolerance by combining it with the perverse politics of identity and power. Too afraid of being labeled racists by campus radicals, the liberals have largely given up fighting for their own professed principles: democracy, equality under the law, equality of political rights, and the rule of law.

The drive to reduce “inequalities” in pursuit of “social justice” on campuses now takes precedence over every long-standing right cherished by liberals, most especially the freedom of speech.

Today’s students are willing to trade freedom for comfort. They will end up with neither.

How Did Things Get so Bad?

Identity politics, which is diametrically opposed to individualism and freedom, is now ingrained in the fabric of our universities. The sorting of students into “oppressors” and “oppressed” starts at the beginning of the contemporary college experience.

Those sorted into the “oppressed” category are exhorted to bring up their “marginalization” at every opportunity. Most of them cannot describe how they have personally faced substantial racial, ethnic or other discrimination (because few have).

So instead, they dutifully recite talking points about the “structural oppression,” “white supremacy,” and “systemic racism” allegedly faced by their identity group.

When conflict erupts, the “oppressed” are entitled to do as they please. If they behave well, they are praised for restraint in the face of injustice. If they behave badly, even violently, the “system” is blamed, and they are absolved of all responsibility.

Those sorted into the “oppressor” category usually consist of people who are some combination of white, heterosexual, Christian, and male.

Their highest calling is self-flagellation. They are required to condemn their own “privilege” and denounce the accomplishments of themselves and their families as unearned and unjust. They are to apologize for their identity group at every opportunity.

Those who try to think for themselves are denounced for their heresy as traitors to the cause of collective liberation. Those who insist on following any kind of moral principle or precept – which will necessarily offend some people – are deemed intolerant and demonized.

A Culture Of Hypersensitivity

We are now viewing the utter inability of liberalism to stand up for its own values. Modern American universities are no longer liberal models, but due to their restrictive and Orwellian environments, foster hypersensitivity and conformity.

The sense of victimization that these students feel is used to justify their nasty tactics. If you are on the wrong side of the social justice war, they will not stop at attacking your arguments. They will go after you personally – your job, your reputation, and your livelihood – to intimidate.

Not realizing that capitulation welcomes contempt rather than respect, liberal college administrators have capitulated and accommodated the radicals.

The radical left wants power, not justice. Liberals betray their own principles of freedom and equality under the law when they acquiesce to policies of racial quotas in the classroom and political censorship on the campus.

University of Missouri students demand a faculty that is a minimum of 10 percent black, and demand the addition of a mandatory “awareness and inclusion” curriculum developed by non-white students and faculty. They want to dictate the academic offerings of a university, with special treatment for their own racial groups. That is not equality.

Leftists are destroying liberalism. Universities are quickly gaining a well-deserved reputation as some of the least free institutions in American life.

The task is for conservatives, and true liberals, to stand up for America’s moral, legal, and political foundation.

Establishing classical liberal values in America required tremendous sacrifice on the part our forefathers. We are not about to see that legacy damaged by students who have no understanding of the source of their own freedom and prosperity.